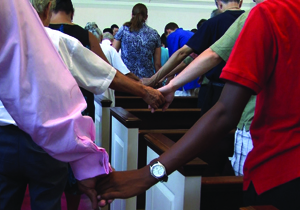 Rather than facing a declining church membership, Viers Mill smartly opened its doors to non-Caucasian ethnic groups and in so doing, created a multi-ethnic worship environment that has created an exciting buzz throughout its campus.

Every Sunday morning at Viers Mill, four churches share space on the multi-building complex. In the basement of the church’s chapel, Chinese Christians worship in Cantonese and Mandarin. In the large combined classroom space linking the older chapel with the newer sanctuary, Hispanic Christians worship in Spanish.

In the chapel’s sanctuary, African American Christians worship; and in the main sanctuary, a multi-ethnic congregation worships in a traditional worship service. All at the same time.

To make it work, the four congregations, with a total of 350 worshippers, schedule their services and Sunday school classes at opposite times in order to share the space.

Four times a year, the four congregations meet in the church’s main sanctuary for a combined worship service, where they do the Lord’s Supper and baptisms together. The four pastors share the preaching responsibility, each pastor taking one Sunday, providing the sermon and the special music.

“The Chinese and Hispanic congregations bring their hymnbooks so everybody can sing the hymns in their native language,” said Wilson. “You may be singing Amazing Grace in English while the people around you are singing in Spanish and Cantonese. Just a lot of fun; it’s like what you think heaven is going to be like. It’s a great way of doing ministry.”

Wilson explained all the churches work together to care for the space, contribute funds and share rooms and resources.  Throughout the week, the fellowship hall and the larger sanctuary are available to all four congregations for weddings, funerals, revival services, concerts, and other special events on a first come, first served basis. In addition, the four pastors meet regularly for prayer, encouragement, calendaring and coordination of the facilities.

“One of the things very exciting about Viers Mill is the four congregations do not see each other as the renter or the rentees. They don’t rent space from us. They are us. They are family. We’re the mother church. They are the children. We’re also brothers and sisters in Christ working together, reaching other people that the congregations can’t,” he said.

“That’s really very exciting, particularly here in the Viers Mill community, where the schools have as many as 80 different languages spoken by children. This is an international community.  And any way we can reach people for Christ, we want to try and do that, no matter what language they speak.”

The Spanish and the Cantonese congregations have the largest membership, but the focus on the multi-ethnic worship has been meaningful to each church.

“We work together, laugh together, pray together and enjoy life together. Once, the Cuban Spanish pastor baptized an African American boy in front of the group of Cantonese and European Christians,” Wilson said. “I love that story. It sort of sums up who we are: four congregations, three languages, but just one Lord, working together to try and reach the very big, very diverse neighborhood.”