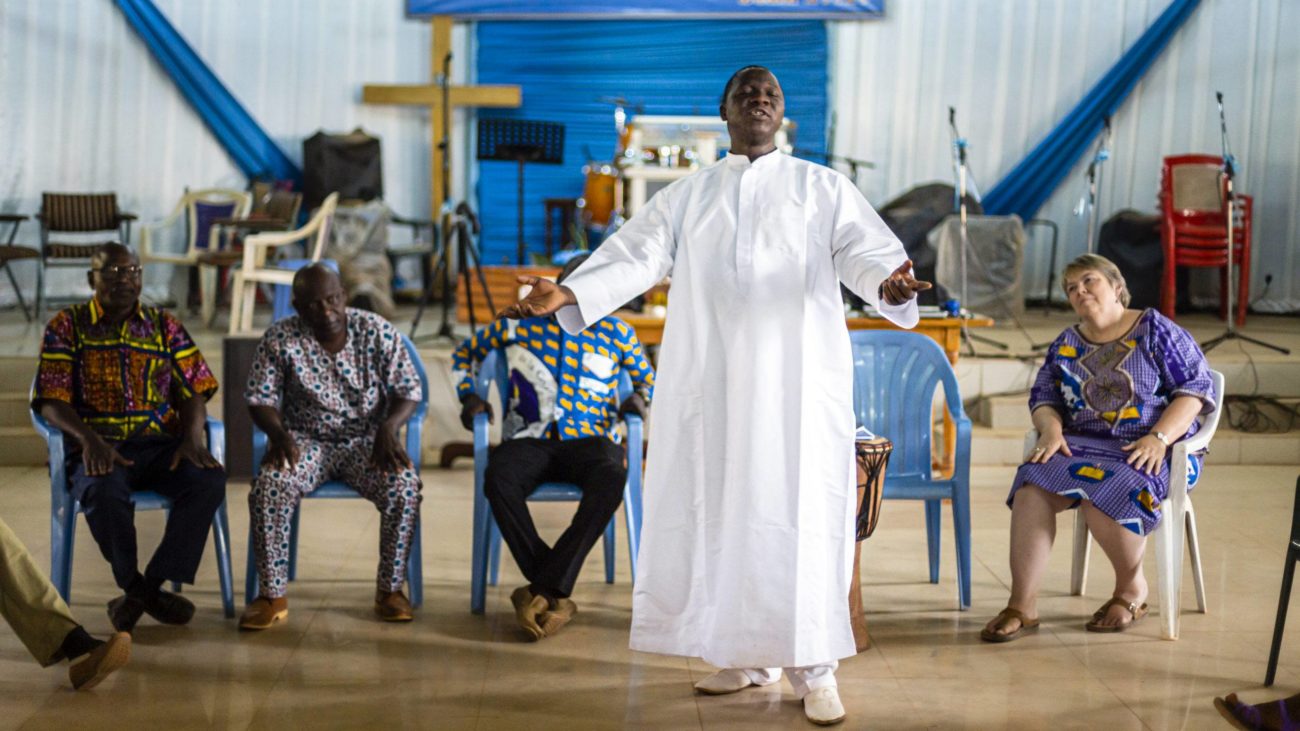 Behind the Lens: How Bible Storying Changed Seni’s Life

For several years, I have been documenting the work of West Africans and International Mission Board (IMB) missionaries who are using oral methods to evangelize the lost, disciple believers, and plant churches. Orality strategies include communicating the gospel through spoken words and stories – communication that does not depend on written words. This form of evangelism and discipleship is common in nonliterate cultures.

I’ve become very close with one team out of Burkina Faso that is now seeing incredible fruit from their years of faithful perseverance.

Seni was one of those rare photographic subjects that would have a lasting impact on me and my spiritual life (IMB Photo).

At the forefront of that team is a Burkinabé man named Seni. He is larger than life, literally – over six feet in height with a joyful, boisterous personality to match. The first time I photographed him sharing Bible stories with a group, he captured my attention so much that I forgot about my camera and just listened. He was animated, dramatic, and, very obviously, passionate about what he was saying.

You wouldn’t believe it seeing him in action today, but Seni will tell you he used to be a lackadaisical Christian just going through the motions of weekly church attendance. However, everything changed when he learned about Bible storying from an IMB missionary and began taking up the practice of sharing God’s Word in his heart language.

God’s work throughout humanity’s history was no longer just head knowledge but had taken root in Seni’s heart – not just memorized but meditated upon. The seed had fallen on good soil as it did in Jesus’ parable of the sower.

God had blessed Seni with the gift of storytelling, and in taking up the Great Commission, he had found his life’s purpose. He quickly saw the life-changing power of the Word. Within his own family, he saw the stories strengthen his marriage. His father, who had been a well-respected Muslim leader, gave his life to Christ. Seni even planted a church that now reaches nearly 200 in attendance. He was on fire for the Lord!

While capturing photo images and video at a training that Seni and his colleagues were leading at a Bible school in Togo, I was asked if I could help him with an ongoing media project he had. He had been submitting videos shot on a cellphone to a satellite TV station in Burkina Faso. The videos were simple: 5-8 minutes of him sharing a Bible story followed by ten to twelve minutes of group discussion. The station was airing them to an audience of thousands!

It was the week before Easter in 2021, and he wanted to make two new videos to broadcast. The first would be a panorama story that covered the entire narrative of the Scriptures, from creation to Christ’s return. The second video would tell the story of the first Passover and connect it to the Easter story of Christ’s death and resurrection. He wanted me to help shoot them professionally and edit them quickly so that they could air for Easter.

My two cameras film the video that was aired on TV. The group sits in a semi-circle to facilitate discussion of the story. It is very important in West African culture for everyone to have a voice as they process the meaning and implications of the message (IMB photo).

I filmed the storying session and worked through the night to edit it. The following day, we uploaded it to an IMB Scripture resource specialist to check its integrity. Then it was sent to an IMB missionary in Burkina Faso, who rushed it to the TV station on Good Friday. The station was impressed by the improved quality of the video and aired it twice that weekend to its massive audience.

Seni’s life story reminds me of Jesus’ parable of the talents, which has resonated with me for years. We all have different talents that we are called to put into service for the kingdom of God. In fact, our English word “talent” derives its meaning directly from the Greek word used in that parable!

Early in my media career, I struggled to see how God could use my skillset for His purposes. Seni also took years before he recognized his storytelling abilities were a gift from God. Once we applied our talents to Great Commission purposes, we found joy and satisfaction in our life’s work.

I am inspired to see the undeniable joy in Seni as he tells God’s stories. The truth is that that joy will pale in comparison to what he will experience one day when he hears the glorious voice of the Lord saying, “Well done, good and faithful servant! … Share your master’s joy” (Matthew 25:21, ESV and HCSB). May we all strive to be so faithful and experience such joy.

Cover photo: Seni became a “master orality trainer,” and I’ve had the privilege to follow him outside of his home country to see him training other Africans in this effective and practical lifestyle of proclaiming the Word of God (IMB photo).