Celebrate Recovery is a “Discipleship Factory” 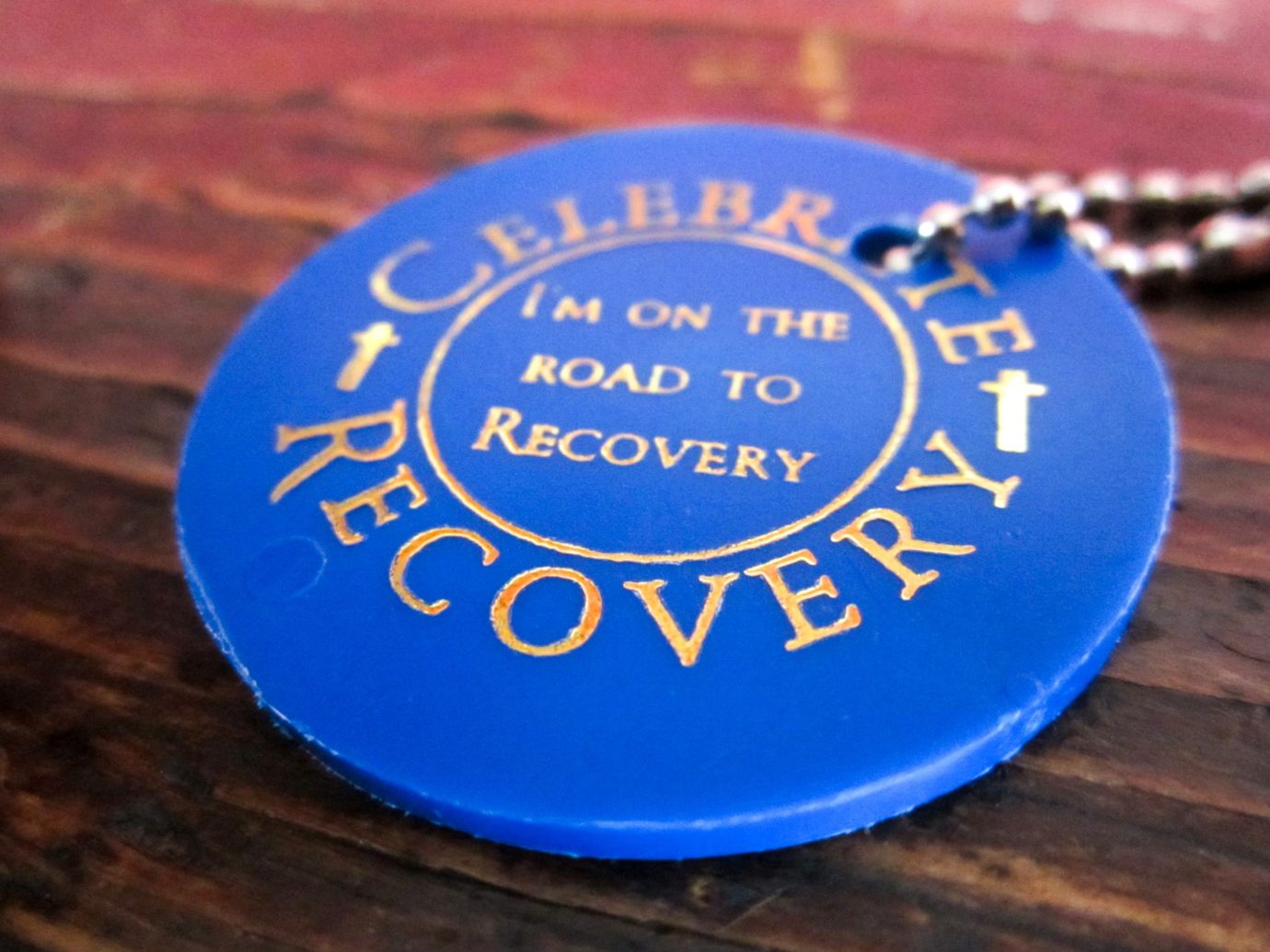 Celebrate Recovery (CR) is a place for folks struggling with hurts, hang-ups, and habits, right? Yes, but actually, there’s a lot more to it, says Marc Bartholomew, the CR pastor, and leader at Emmanuel Church in Huntingtown, Md. Bartholomew adds an additional tag — “It’s a discipleship factory.”

A time of prayer at the men’s step class graduation. (photo submitted)

Emmanuel Church Pastor Rick Hancock, who previously served as BCM/D’s director of evangelism and as an interim executive director, agrees with Bartholomew. “It’s everything you want a discipleship program to be about. It’s a life transformation process. It’s not just learning about the disciples or the twelve tribes of Israel, but it’s about the truth from the Word of God and dependency on scripture, and trusting in God to transform lives.

Every Friday the CR group has a meal together, a large group meeting with recognitions, worship, and prayer, and then breaks into various small groups for those struggling with addictions, and life issues. “Discipleship takes place in those groups. And then through the week, they go through step studies rich with scripture.”

Emmanuel Church has a membership class requiring new members to be in a small group. Hancock is so impressed with CR that now CR is considered one of those groups.

Willie Forman is one story of how God is using CR. A Chippewa American Indian, Forman was a gifted and talented student who began experimenting with drugs and alcohol only to fall fully into addiction. He was incarcerated more than 25 times and overdosed, and almost died. “The insanity of drug abuse led me to look for the same drugs I overdosed on.”

Photo cover of one of Willie Forman’s early albums, “Like a Jet.”

When he ran out of drugs, he was desperate even resorting to drinking mouthwash. “I stole, lied, and cheated to get the next trip.” As his tolerance level increased, he had to keep using more substances to get the same effect.

After being in rehab and attending meetings, he was clean and sober for three years before relapsing and discovering he had physically harmed someone. He was horrified. “They showed me pictures. I hurt someone badly.” Forman was sentenced to 20 years in prison with ten years suspended. When his father passed away while Forman was in jail, he said, “My heart broke into pieces.”

“I began crying and asking God for help,” God answered that prayer and began to move in his heart and Forman began to change. “I was trapped in a cell the size of a closet with a toilet, but God blessed me. I grew, studied, and prepared. I was active. I worked out, played basketball, and learned a lot.

“Prison was one of the best things to happen to me. The best thing, though, was accepting the Lord Jesus Christ.”

Forman, a Christian rapper who goes by the handle, “Indian Will God’s Arrow,” has become a longtime CR participant. It is a lifeline for him and he is now a part of the CR team, helping with worship, leading small groups, and anything else needed.  He even wrote a song about CR that Bartholomew regularly uses during their large group sessions. He is working with other musicians to record a video. Click below to hear the “Celebrate Recovery” rap. He will travel to Texas later this month to be a representative of Emmanuel’s CR group. Forman said he highly recommends CR to those struggling with hurts, hang-ups, and habits.

The Masks Come Off

Hancock said, “When I heard the first few CR testimonies, I was amazed at how candid and transparent they were. People talked about addiction to pornography, drug use, alcoholism, codependency issues, and abusive marriages. And they weren’t ‘churched up’ for acceptable conversations. I’ve been in other churches where people share dramatic testimonies, but I’ve never heard them as raw and real as those at Emmanuel. Once I got over the shock and awe, I began to really feel sympathetic to what they were facing.”

And then, Hancock began some self-examination. “I thought, what am I doing about my issues? Am I working through a process to become healthier?” Hancock said there came a realization of, “that’s my story too — just a different label, a different issue.”

Bartholomew says there is a misconception that everyone at CR is dealing with alcohol or drug addictions. It’s really about a third that makes up that group. “Throughout the country, that’s a pretty ‘good stat,’” Bartholomew says. He has a good grasp on those numbers, serving as the state CR representative since 2006.

Those who do abuse drugs or alcohol are usually attempting to deal with underlying issues. As they work through the physical addiction, they then move to the other challenges. CR participants have a variety of situations they’re working through, Bartholomew shares. “There’s sexual addiction, grief, depression, overeating, co-dependency, family dysfunction — it’s a broad spectrum of stuff.”

“Christ says bring those burdens to Him. He can handle all that.”

CR impacts the entire church because, Bartholomew explains, due to the nature of CR, people can truly be themselves in and out of the church.

“People like Anita, Kelly, Steve, others, and I  are now mentoring and discipling younger or newer people, helping them build a life that’s built on Christ — praying, reading the Bible, being supported, and constantly moving forward.

“What that has done to the church is that, as a whole, CR has been accepted because now it’s not just ‘oh for THOSE people. It’s part of the church, and we speak it from the pulpit, on the floor, on just about every platform we speak it. We speak about CR as a way to get you balanced and lined back up with God; It gets you into a family that unconditionally loves you. You don’t have to feel ashamed. You don’t have to feel like you have to put a mask on for Sundays. That’s the atmosphere CR breathes. People don’t come in with a big façade. They’re relaxed. They can be themselves.”

Each week CR meetings include dinner, large group worship, teaching, and testimony, and then they break into small affinity groups. Bartholomew says the small groups are gender-specific and deal with various issues. There are groups for addiction, sexual purity, overeating, grief and loss, depression, and a general life issues group. There was a need for a divorce care group for a season. In fact, Bartholomew thought it would draw maybe three people, but it became one of the largest groups. Groups are fluid. As they are needed and leaders available, they are formed. They are dissolved when no longer needed.

At first, Bartholomew participated in Emmanuel’s CR program but became the CR leader after former pastor Vic Simpson died in 2018. The two men met and became friends through state CR meetings that Bartholomew continues to lead.

Bartholomew says, “Vic really loved hurting people. It didn’t matter if they were sleeping in tents, he loved on you. He felt CR was a tool to reach people who most can’t because we don’t have ‘that’ story.”

And he gets it on a personal level. He went through a painful time at a previous church years ago and was hurt. Deeply. “Here’s the beauty of CR. Even as a leader and minister, I had to humble myself and go through the steps and go through the process again to ensure that I was grounded in God. I made mistakes, I said things, and I did things. I had to make amends, ask and offer forgiveness. It wasn’t pretty. But I had supportive friends who believed in me, and knew me, lifted me up, encouraged me, and mentored and discipled me back to health.” Eventually, the broken relationship was restored.

“I think CR produces healthy people, though not perfect. I don’t know of any other program in the church world that does that.”

Sharon Mager is a communications specialist and BaptistLIFE correspondent