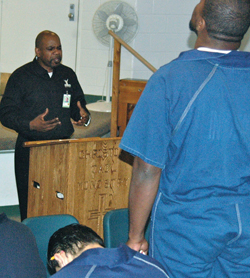 JESSUP, Md.—The men, mostly under 30, a mixture of black, white and Hispanic, praised God mightily, singing “Hail, Jesus, You’re My King,” in loud, strong voices. Some raised their hands, others looked to heaven. It was a worship service so exciting that surely the angels must have been present and participating. That service was the beginning of a Celebrate Recovery program at Howard County Detention Center (HCDC) and the singers were inmates.

Prison Chaplain Gerard Washington asked the men, “How did you picture God when you were a child?”

“Santa Clause,” one man quickly said. “As a giant,” another man said laughing. Others said a father figure, a ghost, or non-existent, one said. “I saw him as the moon,” one man said. “I was in jail for five years and seven months and when I came out I looked up and saw the moon. I saw God in the moon.”

“Let me tell you how I saw God,” Washington said. “I saw God as someone who was going to zap me when I did something wrong. But he’s a loving God!” Washington quoted John 3:16. The inmates sat quietly, some shaking their heads in agreement.

Washington began ministering as a chaplain for Christian Jail Ministry in January after volunteering over a decade. He loves his job. He loves the inmates, and it’s obvious they love and respect him as they hug him, shake his hand and listen so attentively.

While attending Celebration Church in Columbia, Washington heard the call for volunteers and responded.

“I knew God laid it on my heart,” Washington said.

“God lifted me out of that kind of lifestyle. I was never sentenced to do time in jail, but I did spend time in Howard County Detention Center (awaiting trial),” Washington said. “I was blessed. I did some things that I should have gotten time for but the Lord spared me.”

“God delivers you out of situations because he knows what you can do—go back to these young men and women who find themselves in that situation and give them hope.”

Washington said he had breakfast with a young man who had been back to prison three times. “He truly accepted Christ as Lord and Savior. He had a true encounter and is moving on.”

The man has a job as a seafood manager and when he can he attends early morning prayer with Washington.

Washington said he was initially nervous when he began doing jail ministry. “God gives us the strength to get through those things, then once you start doing them they’re not as hard. A lot of times people need to stretch themselves a bit.

“The highlight is seeing someone make a change in their life and becoming productive citizens, working, being good mothers and fathers, taking part in their churches. The heartache is seeing them come back in.”