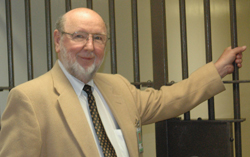 JESSUP, Md—There’s a bleak stretch of Route 175 in Jessup, the address of several Maryland correctional institutions. Howard County Detention Center (HCDC) is one of those institutions and at any one time home to 300-350 inmates–many who are broken, addicted and totally void of any self-esteem. Christian Jail Ministry (CJM) brings hope into that sanitized intimidating facility.

Dale Pace, a soft-spoken gentleman and scholar and a member of The Church at Covenant Park, Ellicott City, is the founder, president emeritus and lead chaplain of Christian Jail Ministry, a non-denominational ministry sponsored by various churches, including many BCM/D, the Mid-Maryland Baptist Association and Mid-Maryland Baptist churches. Pace never “did time,” but he has invested much of his in the lives of inmates, where he’s seen God’s transforming power.

“There are a number of people whose lives have really turned around and changed,” Pace said. “They are drawn to the intangible benefits of what happens inside a person.”

“The ministry’s mission is fueled by the sentiment behind Corinthians 5:17, ‘Therefore if any man be in Christ, he is a new creature: old things are passed away; behold, all things are become new.’”

“The power of Christ can transform anyone, no matter what that person has been or done,” Pace said.

Pace and his children moved to Columbia in 1979 and began looking for churches. They visited a Presbyterian church whose pastor was providing pastoral counseling at the Howard County Detention Center. Learning of Pace’s previous involvement with ministry to prisoners suggest Pace take the lead in ministry at the Detention Center, which he did and CJM began.

Before his return to Maryland in 1979, Pace led programs in several dozen correctional institutions, including jails, prisons, juvenile facilities, and halfway houses. He was certified as a Supervisor Correctional Chaplain by the Association of Evangelical Institutional Chaplains. He authored a book, now out of print, on ministry to inmates that was used as a text in seminaries and Bible colleges.

“The first inmate I spoke to accepted Christ. I considered that a bit of confirmation,” Pace said of his call to ministry to prisoners.

Pace worked prayerfully and tirelessly to grow CJM, recruiting churches, chaplains and other volunteers. In addition to his ministry with CJM, Pace, a former pastor, was a member of the Principal Professional Staff of the Johns Hopkins University Applied Physics Laboratory and taught at times in graduate technical management programs at Johns Hopkins.

CJM’s ministry now involves up to 300 volunteers each year in its ministry from several dozen area churches. More than 4,000 inmates a year pass through the Howard County Detention Center and the majority of them return to the community from the detention center.

While CJM would like to devote ministry to those in jails and help those who are transitioning back to the community, funding won’t allow for both, so the ministry is primarily focused on ministering to inmates while in the detention center.

Pace wants to see churches step forward and help with the transitioning of the inmates. The most important way a church can help is by providing a liaison for inmates, someone who will stand by the newly released man or woman, help them acclimate into the church, provide resource information and be a friend. The church can also help by providing transportation and guidance in helping the inmate find a job and, if necessary, housing.