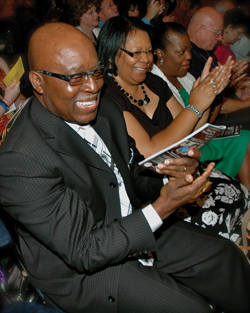 COLUMBIA, Md.—Although his tenure started rocky, James Dixon, outgoing president of the National African American Fellowship of the Southern Baptist Convention, thanks God for the difficult situations he faced.

“I take race reconciliation seriously, and I’m passionate about what I believe. My opening statement when I took office caused some people to become very uncomfortable,” explained Dixon, noting he was misunderstood, causing him to experience stressful times. “Many of them didn’t care for my leadership because of the stands I was taking—especially with racial reconciliation.”

Notwithstanding, Dixon pointed to two situations, which “really drove home the joy” of his national presidency: one involving the North American Mission Board and one involving the Ethics & Religious Liberty Commission.

Also high on his list was the SBC’s focus on the multi-ethnic community and the election of Fred Luter as SBC president.

Dixon, missionary for African American church development at the Baptist Convention of Maryland/Delaware recalls asking questions that challenged NAMB’s new president, Kevin Ezell, when it appeared that the multi-ethnic community was being cast aside. “At that point, the questions caused trouble in the water,” he said. Since that time he holds monthly prayer meetings with Ezell and Frank Page, the president and CEO of the SBC Executive Committee.

Dixon credits the power of prayer for the establishment of a better relationship with Ezell and a change in the environment at NAMB and throughout the SBC.

The pastor of El Bethel Baptist Church in Fort Washington, Md., said he also feels God used him to “impact the situation” involving ERLC President Richard Land’s “injudicious” comments on the Trayvon Martin case on his call-in radio show March 31. Martin, a black teenager, was shot and killed by neighborhood watchman George Zimmerman, a Hispanic, in Florida in February.

After meeting with Dixon and five others from NAAF, Land issued a five-part apology (http://www.bpnews.net/bpnews.asp?id=37795) and wrote personal letters to those he offended: President Obama, Al Sharpton, Jesse Jackson, and the Martin family.

“I felt like we needed to deal with the situation from a redemptive posture,” Dixon said, acknowledging the outcome could have been a disaster.  “We were very redemptive, very supportive, but very firm with him.”

In the midst of it all, Dixon said his “brethren” and all present experienced a powerful moment. He added, “We definitely need to continue the conversation concerning racial reconciliation. We cannot allow what God has placed in our hands to be hindered in terms of us going forward to make an impact in this whole racial situation.”

“This has been a long time coming,” shared Dixon, commenting immediately after Luter’s electrifying election. “As I look back on how long I have been a Southern Baptist—30-plus years—I didn’t think I would live long enough to see this!

“This whole process has been God-driven. It happened at the appropriate time, the right time, and God has placed it here so that we may establish better relationships among people—not just white people, not just black people, but His people.”

Dixon praised God for allowing him to be “a bridge-builder for Southern Baptists.”

“As I look back at my two-year tenure as president of NAAF, if I had to do it all over again and go through everything I have gone through to get the same results, I would do it the same way. To God Be the Glory!”