Fire in the Field Revivals 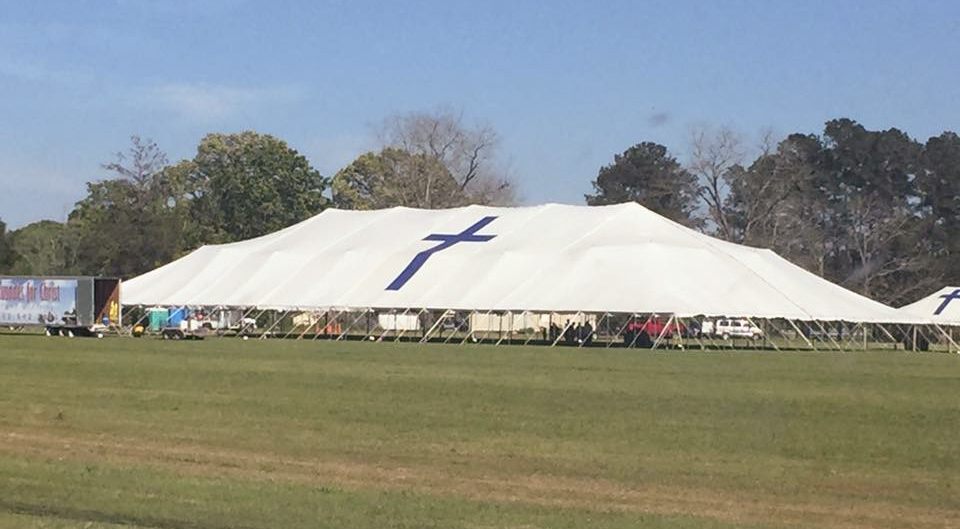 At least 30 churches across denominations — Baptist, Wesleyan, Pentecostal, and non-denominational are excited to host two multi-denominational tent revivals called “Fire in the Field” in Georgetown, Delaware, and Cambridge, Maryland. Pastors and leaders have been meeting monthly in preparation, and Evangelist Frank Shelton expects those numbers to rise as leaders continue to pray and as excitement spreads. Shelton, who has filled pulpits and preached revivals throughout Maryland/Delaware churches, will share the messages at each service.

The massive tent, 100 x 125 feet, can accommodate 2,000 people. It comes with an 18-wheeler, chairs, steel poles, lights, and a tractor-trailer for transport. Shelton said multi-millionaire, Joe Anderson, Jr., was “gloriously saved” in his 60’s. “He had a heart for souls.” Anderson bought the $250,000 tent, truck, and all the accessories to have revivals. Shelton quipped, “It’s like Ringling Brothers circus without the gimmicks.”

Shelton said the revivals are well organized with prepared counselors to help those making professions of faith. John Bush, who founded “Across Festivals,” leads and organizes the revivals. Bush was trained by the Billy Graham and Luis Palau Associations.

Bush and Shelton had revival services in Alabama under the same tent and had 1800 attend nightly for seven nights straight, and 405 people made professions of faith. “That was in a town with about 6,000 residents,” Shelton said.  “Our prayer is, ‘Lord, do it again’ and ‘May revival begin with me!’”

Delaware Revival
The Delaware revival is October 10-14 at Crossroads Church, in Sussex County. Shelton said it’s not easy to find churches willing to participate and find land available, and he is thrilled that God provided this church. Crossroads has a 50-acre field across the street from their building. “It’s a perfect place. People can park as far as the eye can see,” Shelton said excitedly. “Not only that, but they’re allowing us to use the bathrooms at the church and providing a shuttle.”

There’s a lot of enthusiasm building, said Shelton. The Bridge, a large Christian radio station in the Delmarva area, supports the revival and will allow pastors to call the station, share about their churches, explain why they believe revival is needed, and encourage people to attend.

With the various denominations joining together, Shelton said, “This is an incredible opportunity to show Christian unity.”

Churches interested in partnering with the Delaware revival or who want more information may email John Bush.

Cambridge Revival – Historical Location
The tent services will be in Cambridge on October 24-28. Randall Blackmon, the pastor of Faith Baptist Fellowship Church is one of the 15 local Maryland churches involved. At least 30 people have been attending meetings to plan for what they’re hoping will be a massive spiritual event.

Blackmon said, “We’re just praying. The Lord is the one drawing people. We just have to pray, ‘Holy Spirit, grab ahold of people’s hearts.’ We’re praying for a true, genuine spiritual awakening and revival.”

The tent will be at the corner of Race and Cedar Streets in a vacant lot in the center of town. “It’s a perfect location. It will fill the whole space,” Blackmon said.

Churches interested in partnering with the Delaware revival or who want more information may email Randall Blackmon.

The tent revival has an interesting history. Joe Anderson, Jr. started Anderson Columbia, a successful paving and construction company in Alabama. A member of First Baptist Church of Cross City,  Anderson made a profession of faith late in life and had a passion for evangelism. He felt led to buy a tent and host revival services. Though many believed the days of tent meetings were no longer an effective tool for winning souls, Anderson, after prayerful consideration, moved forward and furnished the funds for the huge tent, chairs, sound system, stage, lights, and a tractor-trailer. Within six months, the first revival was held in Old Alabama Town. That was in 2009. The revival then moved throughout the Bible Belt. When Anderson died in 2016, over 3,000 had made confessions of faith during those tent revivals, and later thousands more would confess Christ as savior.

Following Anderson’s death, his family gave the tent and all accompanying equipment to Anderson’s friend John Bush, founder of Across Festivals and then a member of First Baptist Church of Montgomery, Alabama.

Bush explained “Across Festivals” ministry is an “alongside” ministry. “We want to help people to go across the street throughout the world with the message of the cross. We call our events festivals because God’s people would gather for festivals and reading God’s word, but there were always sojourners among them. God told the Israelites to welcome the sojourners so they would come to know the one true God.”

John said the tent had traveled primarily in the south, and the mid-west was surprised when a few laypeople from churches began calling him from the Maryland area asking about the tent, and then several pastors called. Bush knows getting the backing from churches in Maryland and Delaware is God-ordained. God opened doors. The upcoming revivals will be the first time the tent will be used in the northeast, and already, Bush was asked by a pastor in Cambridge if they can do more revivals in Maryland. Bush said, “I told him, ‘just be praying and we’ll see what God does.’”

Shelton encourages other churches to partner with the revival teams. “If we’ve learned anything from the pandemic, God has given us the space of grace to see his face. In the words of Elvis Presley, ‘it’s Now or Never.’ It’s time to pull out all the ways we know to share the gospel as the world struggles with politics, world crisis, and Covid, Shelton emphasized. “The revival is another way to think outside of the box. It’s time to swing for the fence.”

Sharon Mager is a BCM/D communications specialist and BaptistLife Corespondent.