Fourth annual Concert of Prayer to be held on Sept. 9

> Baptistlife Online > BCM/D > Fourth annual Concert of Prayer to be held on Sept. 9
Back to All Posts 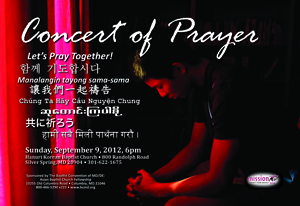 SILVER SPRING, Md.—Ethnic churches in the Baptist Convention of Maryland/Delaware are invited to a special Concert of Prayer on Sept. 9, 6-8 p.m. at Hahnuri Korean Church, 800 Randolph Road in Silver Spring, Md.

Organizer Robert Kim, BCM/D missionary for language churches and Asian coordinator for church planting/evangelism, shared that participants will spend the two hours in worship and prayer in a special effort to strengthen prayer in the churches, both corporately and individually.

Last September, around twenty-five churches and approximately 150 attendees participated in the Concert of Prayer.

This year’s evening of prayer will begin with worship, led by the worship teams from Higher Connection Church in Silver Spring and Agape Church in Washington, D.C., followed by three 20-minute segments in which pastors will pray in their native languages. English subtitles will be displayed on big screens, while participants will pray in their heart languages.

Participants will gather in their people groups to pray over the topics of spiritual awakening, church growth, church planting, community response to the Gospel and global missions, and for each people group among others. Each people group will also focus on their own specific needs.

In the final session, an English congregation pastor will lead prayer as three or four people from each people group gather together to pray for one another in their own language.
The evening will conclude with a time of fellowship.

Kim shared that the past Concerts of Prayer were much like the Pentecostal scene in Acts 2, where people from different cultures and linguistic backgrounds gathered to pray.

“I want to see prayer happening all around us,” Kim said, adding that he hopes that the Concert of Prayer will allow the different church leaders to see the power of prayer and to be motivated to include more prayer in their own churches.

“But there won’t be a lot of talk during this time,” Kim stressed, “just a lot of prayer.”