Girls learn to run the race at HighTide Church 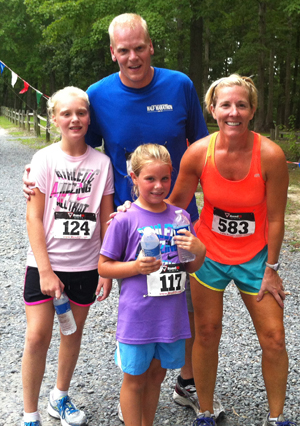 DAGSBORO, Del—HighTide Church will be represented by a large contingency of runners in the Ocean City Sea Side 5k race on October 27. Most of them will be elementary aged girls. Tanya Ehlers, wife of Andy Ehlers, pastor of High Tide Church started a “Run for God” group for elementary school-aged girls. Ehlers meets with the girls and helps them build up their running time each week and she incorporates a Bible study. The girls also have two runs assigned during the week, preferably with a parent. The program has been very popular.

Ehlers, an avid runner, heard through a friend about a program at a school that teaches self-esteem through running and decided to attend an information meeting. While the program sounded beneficial, the cost was $200 for a twelve-week session. She also knew that while self-esteem is important, knowing Jesus was more important and that a relationship with Jesus is the true way to have self-esteem.

She began looking online for a program and found “Run for God.” It’s a small group curriculum for adults, that teaches the parallels of running and living a life of faith in Jesus and it guides participants through steps to ultimately run a 5K race. Ehlers adapted the program for children and presented it to the church.

Ehlers wasn’t sure if it would be accepted. “Some weren’t athletic, some weren’t sure they’d like doing it,” she said. It also meant parents would need to get involved and run with their kids. But several parents and girls were excited and signed up.

She began offering the program this spring to children in third through fifth grade.

“I love that age. Most of them are starting to set what their ways are going to be, what they’ll believe, decisions they’ll make. I want to help them make good life choices before they get caught up with things that are difficult to break later in their lives,” Ehlers said.

The program became very popular and many asked for the program to be expanded to include younger children. In August, Ehlers opened the program to girls in first through fifth grades.

Tanya Ehlers is a runner and knows the challenges and the benefits. She knows it’s especially hard starting a running program. “I know how hard it is to stay motivated,” she said.

To encourage the girls, she gives points for completing the running assignments and for learning Bible verses.

On race day, Ehlers will give awards for the points along with awards for finishing first and completing the race.

Another big motivator is showing the kids their improvement. On the first day, Ehlers had the girls run or walk a mile and she timed them. After the fourth meeting, she had them do it again. Every one of them beat their previous time.

“It was a huge eye opener. It showed them if you put in the time, you will see the difference,” she said.

Ehlers loves teaching the spiritual parallels. “While living a Christian life sometimes we want to give up. We see our friends doing this or saying that and wonder why can’t we be that way or give in to what the world wants us to do instead of what God wants us to do.”

“I think they see it more as they are enduring the harder runs,” she said