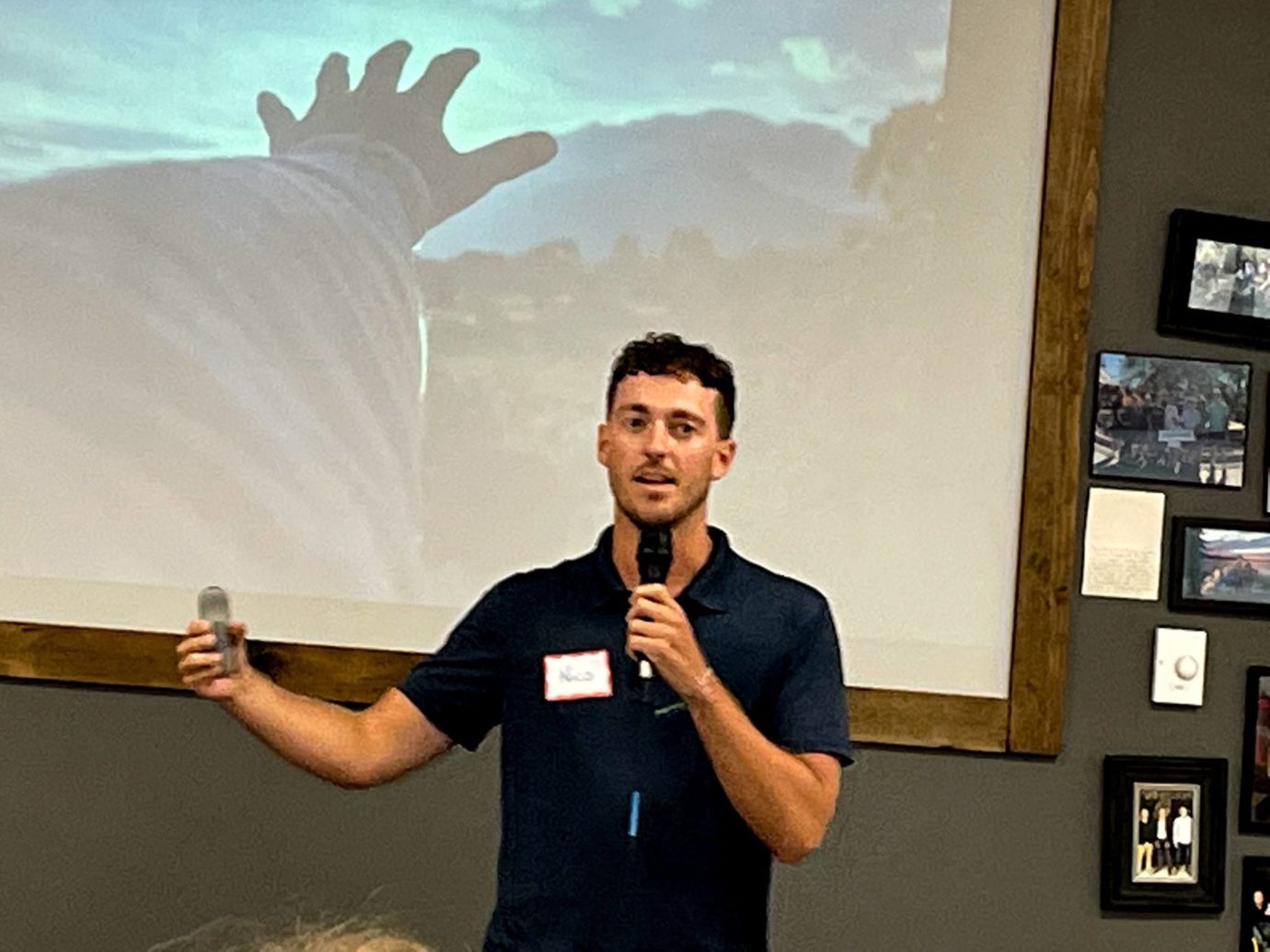 Ogletown Baptist Church (OBC) members are committed to missions — local and international. They’re not choosing to pray, give or go — they are doing it all.  They have two families and one individual deployed with the International Mission Board (IMB). That’s in addition to independent missionaries in Central Asia, church members going on mission trips, and those participating in local mission activities.

Members filled a fellowship hall at OBC on June 29 for a Mission Impact night to hear from two members who were preparing for deployment to the international mission field. Niko Repolle′ will serve a two-year term in Mozambique. The Stein* family is preparing for service in Central Asia.

“I feel like I am jumping into the unknown, jumping off of a cliff,” said Repolle′. But then, the young man really likes adventure! “I’m an explorer. I like to jump off of things, take risks — that’s a part of who I am,” he said, adding that his ultimate goal is to use that passion to honor and glorify God.

Though he grew up in the church, God used a sports injury to draw Repolle′ close to Himself. Repolle′ was bedridden and taking nine oxycontin a day and admitted he was in a dark place. It was then that he experienced God’s presence and the Holy Spirit convicted him. He put his whole trust and faith in God as an adult. Repolle′ said his identity shifted and he became aware of the lost people going to hell. He read IMB statistics that 157,690 people die without knowing Jesus. “Every day people are dying and going to hell without knowing the gospel,” he said.

That led to a “here I am, send me” moment, Repolle′ said, referring to Isaiah 6:8.  And God answered that prayer. “He used me across the street at the University (of Delaware) campus, at Conrad School of Science and in my family.” Repolle′ graduated college last year after studying entrepreneurship and technology innovation. For now, he’s unsure of his life plans. “Ultimately, I feel most fulfilled when I am helping other people learn about Jesus.”

He participated in various international short-term mission trips but he prayerfully decided to serve a two-year Journeyman program with the IMB, although wasn’t sure what part of the world he wanted to serve. “I had no idea where to go.” During training, working with IMB personnel and spending time in prayer, Repolle′ found Mozambique was the best fit.

“I have to learn Portuguese and cross cultural boundaries. I’ll be an open Christian and work with three families living there who are grounded in the culture and society.  Repolle′ said he will live in a fully developed city with over 30 universities and over 40,000 college students and his goal and purpose will be to reach those students with the gospel.

The Stein* family, including Bill, his wife and four young children ages four and younger, will be serving in Central Asia. Bill read from Exodus and shared about the journey of the Israelites through the desert, the challenges and how God was training the Israelites to rely on Him and on God’s faithfulness.

Bill said he and his wife are eager for their upcoming trip, though they know they will be out of their comfort zone.

Niko Repolle′ shares that God opened his eyes to the incredible lostness around him. (photo by Sharon Mager)

He shared that as their family finished preparations to leave — moving out of their home and selling one of their cars — there have been many issues arising. Smiling, he said, “I’m not sure sometimes if it’s Satan saying ‘no no’ or Jesus saying ‘yes, yes.’ Perhaps they are trials to help prepare us for this experience.”

He emphasized relying on and trusting God to supply all of their needs and stepping out in faith.

The area they are going to serve is home to spiritism, animism and folk religions. Bill asked for prayer for discernment, and for protection from Satan’s attacks on his family.

After the presentations, church members, using prayer cards and the information shared, prayed for Repolle′and for the Stein family together at their tables

Chris Rainey, who serves as chairman of the missions committee, also shared about other OBC IMB missionaries — Joe and Elizabeth Blandeburgo serving in the Philippines and James and Carol Johnson* serving in East Asia.

Rainey shared that the church is continually doing outreach and missions around Delaware. They have a foster care ministry and started “Andrew’s Closet,” to help support vulnerable families. They also support Orphan Care Coalition, chaired by Rainey. “Christian Challenge (Baptist Student Ministry)  is also a strong partner in our church. Many of our leaders,  including me, have been discipled from this college ministry,” said Rainey. Additionally, they support a crisis pregnancy center and Urban Promise — a ministry in the city of Wilmington to help at-risk kids, and Young Life, a youth outreach. The church is a strong supporter of the Cooperative Program, Lottie Moon Christmas Offering for international missions, and the Annie Armstrong Easter offering supporting North American Missions.

Joseph and Elizabeth Blandenburgo, with their children (Benjamin and Ellie Rose), are serving in the Philippines (photo submitted)

Rainey emphasized education and communication. “Mission Mondays” are opportunities to highlight what church members are doing in the community.

Hill emphasized that missions education has been part of the DNA of the church from the beginning and they keep the fire stoked. “It’s wired into our culture. Even in membership classes, we are introducing missions. We’ll say, ‘this is Joe and Elizabeth, their family is serving in the Philippines.’” Hill said it becomes personal when people know Joe and Elizabeth Blandenburgo are Ogletown members and went to the University of Delaware.

Missions education is incorporated in pre-school all the way to senior classes. “Our VBS offerings are often to support missionaries.”

Hill and Rainey stressed that the Women on Mission (WMU) at Ogletown is very strong in keeping an emphasis on missions. s.

Those called to missions also know that the church will be behind them, stressed Hill.  “We’ve visited almost every missionary on the field. We don’t send them out and then they are forgotten. They know a part of us is going with them” Hill said.

“Another factor is that we have a pretty large international community here. This past Sunday we had people from over ten nations at our church. I think it’s the feel of the global body of Christ which motivates people to go.

“We say the nations are coming to us, but we also say we ought to go to the nations. It’s not either or, but both.”

Sharon Mager is a BCM/D communications specialist and church correspondent.