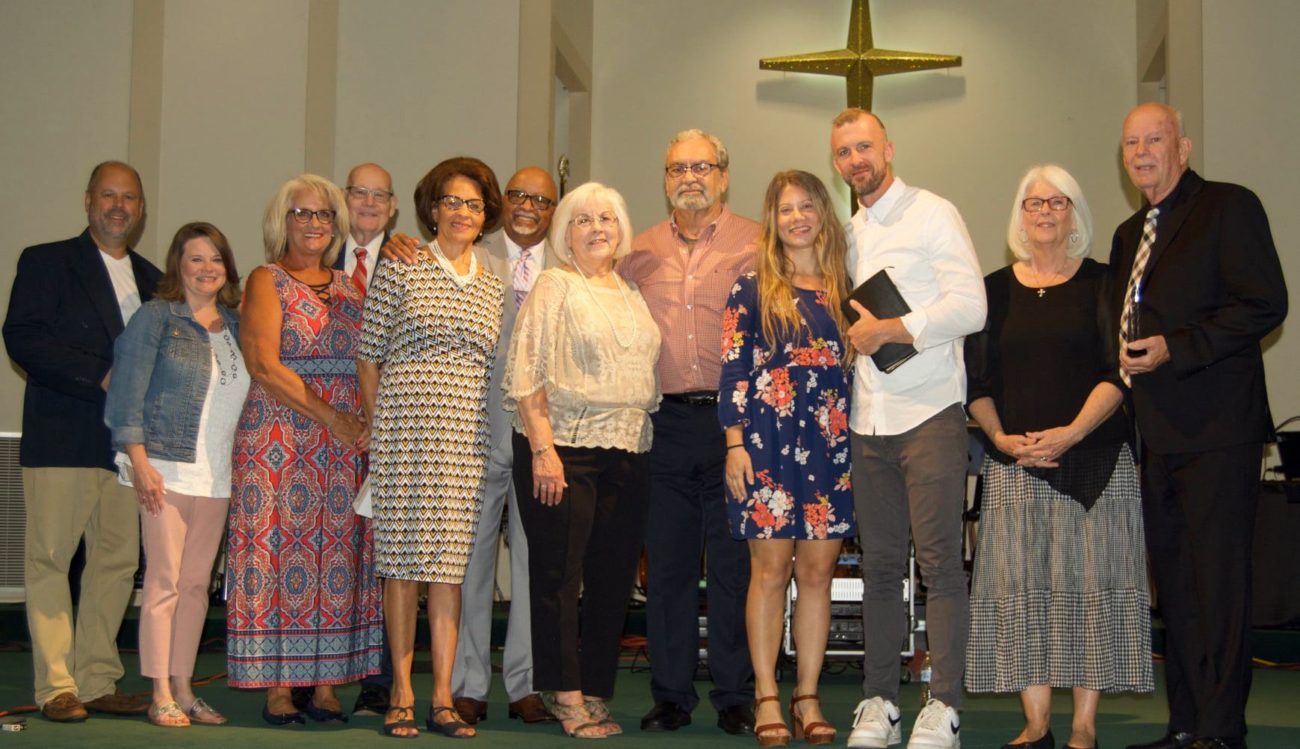 In September, the church gathered to celebrate, with a special worship service followed by dinner, a time to browse historical memorabilia, a concert by “Servant’s Heart,” and a dessert fellowship. Senior Pastor Kevin Randolph shared a sermon based on Philippians 3:10-21. While encouraging the congregation to celebrate God’s provisions in the past, he challenged members to grasp God’s current and future opportunities that God will give them to reach their community and the world for Christ.

Hubbard served from October 1988 to September 2004. During his tenure, the worship and family life center were constructed and dedicated, free of debt. Sharing about God’s blessings during that time, Hubbard recognized the efforts of Jack Reed (now deceased) and his leadership in the endeavor.

Parks served as the associate pastor from January 2001 to June 2007 and senior pastor from June 2007 to May 2014. He is remembered for his tender care of the flock, especially the senior citizens. Due to health issues, Parks retired from active ministry but continues to visit and minister to those in need.

Kurz served as the youth pastor at GBC from June 2003 to December 2008. Then, he left to plant The Garden Church (TGC) in Baltimore, where he continues to serve. Sharing with the congregation, Kurz said that Parks had a huge influence on his life and still considers Parks a mentor.

Dowell, a former Delaware Baptist Association Director of Missions, served as a beloved transitional pastor from June 2014 to November 2015. He currently serves as an associate pastor in Las Vegas.

Glanville most recently served as the interim pastor from April 2018 to July 2019. Glanville is credited with ministering to the body after a time of decline in membership. He led the pastor search team through many meetings, and much prayer before God led the church to Randolph and his wife, Terri.

All of the speakers referenced the great love showered upon them and the rich history the church has had in kingdom work.

A reporter for the Denton Journal wrote of Melvin Morris, “When he speaks, the fireflies and the devil gets the cramps” (photo in GBC History Booklet).

The church began during the Roaring Twenties when Americans first owned cars, radios, and telephones. Troops had recently returned from World War I, and women were getting the right to vote.

The seed for GBC began with a conversation during revival services at First Baptist Church of Cambridge (FBCC) in the winter of 1919-1920. James McCleod, the pastor of FBCC, shared with The Rev. Melvin Morris, the “Maryland State Evangelist,” who was preaching the revivals, that there was a “needy mission field” in the Greensboro area.

According to GBC history by Doris Howard, this was the third attempt to establish a Baptist ministry work in Greensboro. Other ministers were forced to leave town due to opposition.

Morris organized a revival in Greensboro, and local Baptists built a 72 feet by 240 feet tabernacle to seat 1,000 people. The history book records, “A suitable building lot was located while riding through town in Rev. Morris’ Model T Ford.”

The Denton Journal described Morris as a pastor who puts plenty of “pep, power, and punch” in his messages, recording, “When he speaks, the fireflies and the devil gets the cramps.” Morris preached revival meetings from July 3 to Aug. 1. The Denton Journal reported over 25,000 people attended the services throughout the summer. “Scores were converted, and on Friday, Sept. 3, 1920, about 1,500 people gathered around C. M. Pipp’s ice pond and witnessed the baptism of a large number of Baptist converts.”

GBC was organized on Nov. 1, 1920, and the new members called Morris as their first pastor in January 1921. They laid a cornerstone for their permanent building on Sept. 10, 1922. Women sold bricks and bags of cement to help pay the cost of the building.

During Hubbard’s tenure, the church grew and could no longer contain the number of people attending. Hubbard didn’t want to solicit pledges or take out a mortgage but determined to ask people to give as they felt led for a new building. In about a week after the request, members gave $14,000. And they continued to give! Finally, when they hit $95,000, they broke ground. They completed the building in 2001. The bulletin for the dedication service reported the building was purchased debt-free.

Through the years, the church has had various outreaches, hosted support groups for chemical dependency, wives with unsaved husbands, women’s “search for significance,” adult singles, and seniors. They also had ministries for children, students, and musical outreaches.

The church participates in cooperative missions through the Cooperative Program and the Lottie Moon Christmas and Annie Armstrong offerings. GBC members have also ministered in Central American and Eastern Europe. Locally, members have participated in Raceway Ministries at Dover International Speedway, as well as a variety of community outreaches in the Greensboro area.

Randolph said the church has been and is watching God work in their midst. Today, the church has a variety of active ministries, including  Awana, student ministry, GBC Worship, Ironmen men’s ministry, ladies ministry, seniors ministry, and various community outreaches designed to help the church connect and minister to their community and the surrounding areas.

“God established GBC over a century ago to be a light of hope to this area and ultimately to share in taking the gospel to the world. It is amazing to see what God has done over these 100-plus years and experience what He is doing right now at GBC. We are looking forward to what God is going to do in our individual lives and in our church. I believe there are some amazing days ahead, and we give God all the glory for it! What an amazing God we serve!”