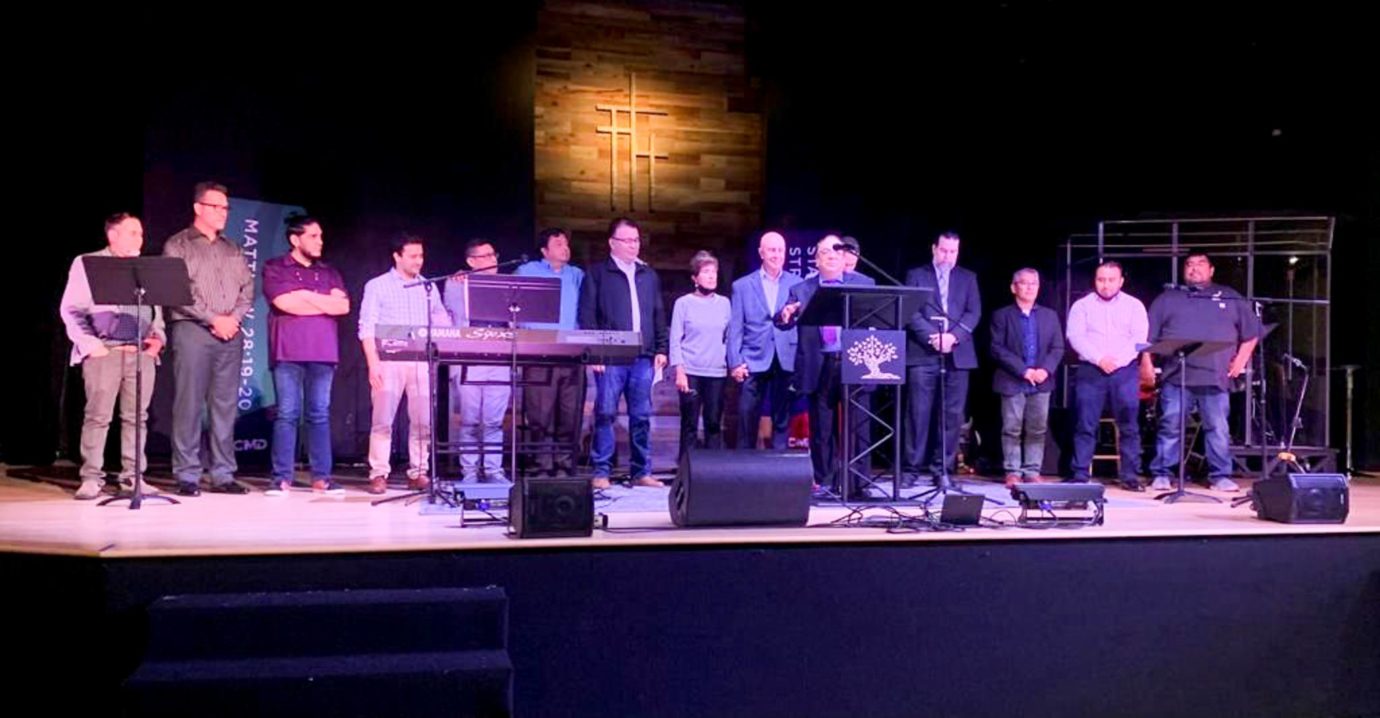 BCM/D Hispanic Church Catalyst Alejandro Molero said the joint services are a great way to bring families and churches together as one body for fellowship and worship.

“We had an excellent time together as sister churches,” Molero said. The music team from Iglesia Biblica Sublime Gracia in Washington, DC, where Molero serves as pastor, opened the service leading with several praise songs. Later, Eliud Reyes, the pastor of Iglesia Bautista Hispana de Easton, MD, played piano and led a season of worship, playing both contemporary music and traditional hymns.

Jorge Altieri, the pastor of Iglesia Bautista Faro de Gracia, Milford, Delaware, preached a message on “The Charge to Preach” based on 2 Timothy 4:1-2.

The congregation recognized Jorge Camacho for his 34 years of ministry following his retirement from Iglesia Bautista Vida Nueva in Davidsonville earlier this year. Efrain Lopez, from Iglesia Bautista de Washington, who Molero said has the most years of ministry within the group, presented a certificate of appreciation to Camacho, and shared about Camacho’s ministry.

Camacho, originally from Guatemala, felt God’s call to ministry in 1987. “I sensed in my heart God’s call to go knock on doors and share the gospel message, and with my wife Sonia’s complete support, we planted Iglesia Bautista Del Redentor in Houston, Texas, where I served as the lead pastor for thirteen years.” Jorge later served as the Hispanic consultant for Union Baptist Association. In 2005 he and Sonia ministered with the International Mission Board in the Middle East region, where they assembled a team of Hispanic workers to share the gospel message among the unreached Arabic-speaking people.

They relocated to Annapolis in 2014. “We realized very quickly that there was not a single Hispanic Baptist church in Annapolis, and with the support of the BCM/D and the North American Mission Board, Sonia and I planted Iglesia Bautista Vida Nueva. where I was the lead pastor until December of 2021.” He officially retired in January.

Hispanic pastors, their families, and congregations gathered for a united worship service on July 9. (photo submitted)

Molero was pleased with the turnout and fellowship, despite heavy rain that kept some away. “There was a lot of encouragement and a lot of family camaraderie,” he said. He was also happy to see several pastors and their families attend the service for the first time.

To continue the momentum and fellowship, Molero has scheduled a third united worship service on October 29 at Iglesia Bautista de Washington in Gaithersburg. He encourages Hispanic churches to attend, as well as bilingual Hispanics who attend Anglo churches.

Featured photo: Hispanic pastors in and around Maryland/Delaware gathered for a united worship service at Riva Trace Church in Davidsonville. (photo submitted)
Sharon Mager is a communications specialist and BaptistLIFE correspondent.