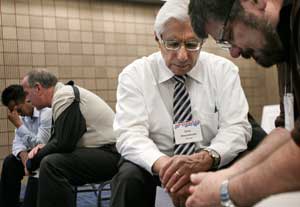 The annual prayer gathering is sponsored by the National Fellowship of Hispanic Churches of the SBC. Leaders said their belief in the power of prayer motivated them to gather for nearly two hours to pray for the June 19-20 SBC annual meeting in New Orleans.

Elias Bracamontes, Hispanic church planter from Topeka, Kan., and current president of the fellowship, said he is glad the group has continued to come together to pray.

“It was an opportunity to be a blessing to the SBC by covering the events and people with prayer,” Bracamontes said. “As the Bible says in 2 Chronicles 7:14, if we humble ourselves and pray, God will answer and bless us.

“We blessed the SBC and were blessed ourselves through the experience of prayer and being obedient to the Word,” Bracamontes said.

“It was a great blessing to pray so that our lives reflect the glory of God and show our dependency in Christ,” said Medina who believes “there would always be a need for fervent prayer for the SBC, the churches, the leaders, and all the people.”

Hector Mendez, pastor of Iglesia Bautista Central in Fort Worth, Texas, described the prayer time as “a beautiful experience.”

“We had a great time of spiritual fellowship in prayer,” he said.

Mendez also said he believes the time together not only gave strength to the Hispanic pastors, but allowed them to express their need for “more encouragement and strength in ministry for all the pastors and leaders of the SBC.”

While Hispanic leaders were praying for Fred Luter Jr. as the Pastors’ Conference concluding speaker, some of the pastors took note that it was “providential” that Luter was preaching prior to his June 19 election as the new president of the SBC.