> Baptistlife Online > Featured > James Dixon: Prayer is answer to tough ministry
Back to All Posts 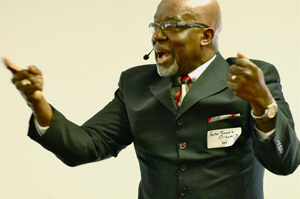 COLUMBIA, Md.—Pastor James Dixon, Jr., understands what it is like to pastor tough churches. He also understands the power of prayer.

Dixon, who now serves as senior pastor of El Bethel Baptist Church in Fort Washington, Md., shared his journey of prayer at an Awareness Conference, sponsored by the African American Advisory Fellowship, held Mar. 9 at the Baptist Mission Resource Center in Columbia, Md.

“I went to the church with the idea to pastor them. But I didn’t know they didn’t want to be pastored,” he recounted, noting the church’s congregants refused to let go of the past, causing undue stress on Dixon and his attempted leadership.

Moreover, though Dixon heard God’s clear call to leave his full-time job to pastor the church, the church could not accept they had a full-time pastor and constantly badgered him to get a job.

“They could not embrace the fact that God called me to lead this church,” he said, describing the lack of acceptance in the church.

“The Lord revealed to me that I was the type that held things in, and I was a walking time-bomb. Folks said things to me, and I would just swallow,” which resulted in him almost going out of his mind and on his way to a nervous breakdown.

At the hospital, doctors prescribed him Phenobarbital, Robaxin and Valium, all at the same time, causing him to feel “almost out of my mind. Almost crazy—a preaching pastor!”

And God did. And Dixon did.

Even though he knew he could have lost the whole church that Sunday, he stood before the packed congregation and enumerated his concerns: he didn’t trust but one of his 18 deacons; a dead pastor was still pastoring the church; the church has penalized every pastor since for what that dead pastor did to them.

The Lord taught him a great lesson that day: don’t allow people to say anything to him without dealing with it right away.

“That internal stuff is painful. It will kill you, Brother. Hear me: that stuff will take you out quick!” he warned.

Since that fateful day, Dixon has been in ministry for over 35 years, the most recent 19 years at El Bethel, which he established.

“The only thing that saved me is my prayer life,” he affirmed. “There is no other weapon in our hands that will handle the spiritual warfare in our lives. Everything that happens in my life is centered on prayer.”

Noting prayer is hard work, Dixon said, “I don’t pray for the sake of praying. I pray for results.”

Dixon has an altar at home where he constantly goes for prayer. Before settling in at night, he talks over his day with God. At the Birmingham church, he purposefully sat in the chairs of members with whom he had difficulty, talking to God about how to handle each situation.

He told the pastors, “It’s bitter… but we must let God bring the sweetener in it.”

He added, “I don’t know about your pastoring situation. You may want to give up every week… But, you’ve got to give it all to God. He is God of all, or He is not God at all. Whatever we ask of Him, we have to believe He will do it.”

He warned the pastors, “Don’t walk out on your ministry before God wants you to.” He shared about a friend who did just that—and grieved the decision until the day he died.
Dixon also said to approach God in prayer with confession, humility and thanksgiving.

“When you go to God with confession, He gives you what you need to deal with it. Don’t be generalizing your sins,” he said, adding, “We always ought to be grateful for what God has done.”

He concluded, “If I had to do it all over again, I’d do it again to get the same results.”
In addition to Dixon, Chris McNairy, of the North American Mission Board; Robert Anderson, pastor of Colonial Baptist Church, Randallstown, Md., and Victor Kirk, pastor of Sharon Bible Fellowship, Lanham, Md., shared about ministry, missions, and servant leadership.

In other business, citing a need to focus more on the relationships among African American churches in Maryland and Delaware, the Council voted to change its name to the African American Advisory Fellowship effective January 1, 2012. The new name reflects a desire to broaden the work of the council and move to a regional approach. To learn more, contact Dixon at (202) 258-1427 or jdixon@bcmd.org.