Labor Day is a day for reflection and action 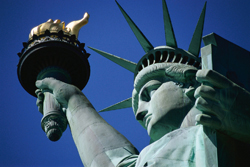 Depending on what you do for a living, Labor Day may or may not have a strong emotional meaning for you.  For those Americans who still earn their bread and butter by the “sweat of their brow,” a federal holiday celebrating backbreaking work is a nice reminder that they matter to the nation.

For many laboring workers who do America’s dirty work for low wages, it isn’t always clear that everyone appreciates their service.  Ever been to dinner with a well-heeled cheapskate who nickels and dimes a waitress over a tip?  Ever observed how many middle- and upper-income people don’t know how to speak to workers who pick up trash, wash cars, load groceries, sweep streets, stock shelves, or change hotel sheets for a living?

While it is now the rage of the chattering class to describe America as a nation of two-percenters and 98-percenters, it seems more likely that what we’ve really become in recent decades is a nation divided by the work we do.  This is because the work we do is so unevenly compensated by our modern economy – based more on the “profitability” of a worker than the degree of difficulty and effort in performing his or her work tasks.  Given a choice between the typical working day of a trash collector or a hedge fund manager, few would choose the physicality and paycheck of the man who jumps off the truck in the rain and snow.  And, yet, for most of us, the public health benefit produced by the efforts of the sanitation worker has infinitely more redeeming social value than the outcomes of the financier who moves digital money around the globe in pursuit of the next minute’s highest earning.

At the apex of the “union movement” in the 1940s, 34 percent of American workers considered Labor Day a big deal.  These were the men and women who worked the late shift at Bethlehem Steel at Sparrow’s Point and the early morning assembly line at General Motors on Broening Highway.  Those jobs are gone now.  In 2012 America, with only 7 percent of private sector workers represented by a union, it’s safe to say that for most of us, the true significance of Labor Day has been greatly diminished.

Still, Labor Day is a day for reflection and action.  It’s a time to consider basic fairness (even morality) in our payscales and work practices.  It’s a day to ask the Lincolnian question “whether a nation can long endure” when thousands of good-paying jobs continue to leave its shores each year, and in turn, suppress wages and job creation at home.  According to economist Nina Easton of Fortune Magazine (9/3/12), 46 corporate headquarters left the U.S. in the past decade, taking with them trillions of dollars and thousands of jobs.  The U.S. Federal Reserve estimates that the federal government is currently losing $100 billion annually in tax revenue because of offshored American corporations.  The Government Accounting Office reports that 83 of America’s largest 100 publically-traded companies now have subsidiaries in “tax havens” such as the Caymen Islands, otherwise known as “financial privacy jurisdictions.”

This is not some theoretical macro-global discussion for Open Door Baltimore.

Every day we work with the poor and the working poor who are desperately trying to secure their little piece of the American dream.  Just last week, we learned of an acute economic crisis faced by a young father we admire who has been in our Rebuild Program for over three years.  Employed at the same construction job since Spring 2011, his current pay rate of well under $11 an hour has put him in a position where his current rent in an impoverished East Baltimore neighborhood is now costing him 52 percent of his gross monthly earnings.  Despite working 40+ hours a week while also pursuing advanced technical training to improve his job skills, this young man has not received a one-cent pay increase since starting this job.  Because he has a criminal record to overcome, he is uneasy about insisting on a pay raise that by all standards of fairness, he has earned.

A recent Pew Research Center study featured in USA Today (8/23/12) grabbed a lot of people’s attention with this conclusion:  “The 2000′s was the first decade since World War II when the middle class saw income and wealth drop.”

Well, here’s another news flash:  for the poor and working poor in America’s inner cities, the situation is even worse.  Until the U.S. Congress and the President of the United States decide to tackle the tough challenges of real tax reform, until America’s mayors and city councils begin to recruit “living wage” employers back to the cities, until American voters begin to see the direct connection between high corporate tax rates (35 percent) and joblessness at home, and until America’s clergy and civic leaders begin to take up the moral cause of full employment, nothing is going to change.  Nothing.

Labor Day only has meaning when Americans from all walks of life, from both political parties, from all economic corners, respect the intrinsic value of American labor and laborers.

Subscribe to posts from Open Door Baltimore at http://opendoorbaltimore.wordpress.com.