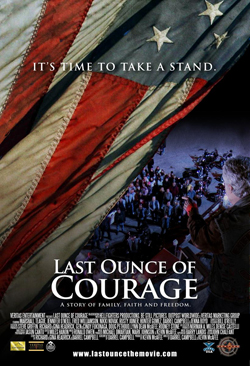 “Last Ounce of Courage,” a freedom, family and faith film that premiered on 600 screens across America on 9/11 in commemoration of Patriot Day, released nationally in more than 1,400 theaters on Sept. 14, making it the largest opening weekend for a faith-based film since “The Passion of the Christ.”

“Our mission with ‘Last Ounce of Courage’ is to not just affect the box office numbers, but to also honor the men and women who have sacrificed so much for our country,” said Director Kevin McAfee (“Beyond the Gates of Splendor,” “The End of the Spear”). “We hope this film will spark a movement of standing up and honoring our military men and women and the freedoms for which they have fought.”

Veritas Entertainment, the film company behind “Last Ounce of Courage,” gave away 6,500 tickets to active and veteran military members and their families for the special 9/11 screenings on Tuesday. Further, they are donating a portion of proceeds from Patriot Day ticket sales to the Warriors for Freedom Foundation, a non-profit organization dedicated to supporting and improving mental, physical and holistic services for our nation‟s active military, veterans and their families.

In addition, Veritas partnered with Homes 4 Wounded Heroes, a program that awards 100 percent mortgage-free homes to combat wounded heroes, to give away a $250,000 home to Houston resident Felix Garcia, a veteran who has received three Purple Hearts during his three tours in Iraq.

“The response to ‘Last Ounce of Courage’ from our military members and veterans across the nation has been overwhelming,” said McAfee. “In my hometown of Nashville, Tenn., the audience gave a standing ovation. But it should be us – the American citizens – who are giving these military men and women a standing ovation along with their families who have faced the biggest battle of all; fighting through the pain of watching their loved one leave home to head into combat.”

The first theatrical motion picture to receive “The Chuck Norris Seal of Approval,” “Last Ounce of Courage” stars Marshall Teague (“Roadhouse”) and Academy Award nominee Jennifer O’Neill (“Summer of ’42”). The film tells a powerful intergenerational story of a grieving father inspired by his grandson to take a stand for what‟s right against a tide of apathy and vanishing liberties. Amidst a backdrop of military conflict abroad and domestic wars against freedom, a highly decorated combat veteran is reminded that we best honor our fallen heroes by holding dear to what they gave their all to defend.

“This is a film about courage, character and conviction, traits that our brave military possess and on which they act every day in order to protect our nation,” said Veritas Entertainment President and CEO Steve Griffin. “We hope ‘Last Ounce of Courage’ can serve as a reminder that freedom isn’t free – even here in the U.S., where apathy all too often leads to an erosion of our personal liberties.”

Beyond entertainment, the filmmakers‟ desire is that “Last Ounce of Courage” will stir a national conversation on values. To that end, in conjunction with the release of the film, the producers have launched StandUSA, an unprecedented social broadcasting platform that gathers individuals, thought leaders and local and national organizations into an integrated community where they can express and share values.

The StandUSA online Facebook community works with the Liberty Counsel, National Rifle Association, American Family Association and other organizations to support American values and amplify the voices of individuals who want to take a stand on these issues. More information is available online at www.joinstandusa.com.

Veritas Entertainment is a film company dedicated to making films with a purpose. Filmmaking excellence and themes of courage, character and conviction are the core elements of the company‟s endeavors. For more information about its film “Last Ounce of Courage,” visit www.LastOuncetheMovie.com.