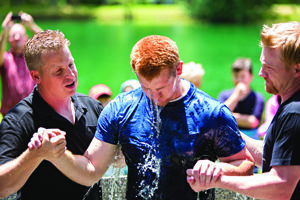 TOWNSEND, Del.—Mark Lashey, pastor of LifeHouse Church, stands in awe of what God is doing with the ministry.

“God is building this church…and sometimes totally in lieu of all our efforts….HE is bringing and drawing people as we ‘lift up Jesus,’” Lashey said.

Lashey, his wife Tammy, and Rob and Stephanie Leight, known more commonly as the band “Calling Levi,” launched LifeHouse Church in February. They moved from their homes to a fire hall and now to a school. In six months, LifeHouse Church has experienced a high attendance of close to 400 people, and they baptized 33 people in June and near the same amount in September.

The two families, along with their support staff, Angela Capito and Sheri Spurgeon, are all completely committed to this new calling and season of ministry.

“We all are doing our best to have a ‘whatever, whenever, wherever’ mentality to serving and addressing needs,” Lashey said.

Mark is the lead pastor. Rob is the pastor of administration and worship. Tammy and Stephanie work with graphics, help with worship, and many other odds and ends. Angela is involved with children’s ministry, and Sheri helps with the administration and media.

The families traveled and ministered through the ministry of Calling Levi  for over a decade and during that time, God had been speaking to them about the need for a church in their community. Lashey especially felt strongly burdened for their neighbors.

Lashey said on a few occasions he tried to convince pastor friends and other leaders across the country about starting a church in the M.O.T.S. (Middletown, Odessa, Townsend and [North] Smyrna area.)

“Little did I know, that eventually, God would call me to be a pastor,” Lashey said, adding that he had no choice but to pursue and obediently follow God’s call to reach his community for Jesus by starting a church.

The group prayed about the decision and eventually turned down an offer to underwrite their expenses to do an album. They knew they had come to a turning point.

They continued their Calling Levi ministry, but began a Bible study in their homes, being clear from the beginning that they were planning for the study to grow into a church. It was a diverse group. Most of the attendees were completely unchurched and knew very little about the Bible. They began with the book of John, going verse by verse.

“What a beautiful thing to help some of them locate the Gospel of John for the first time. Some had never owned a Bible. We saw so much fruit,” Lashey said excitedly. People began to make decisions to follow Jesus and the Bible study grew.

Launching the church was scary, Lashey admitted. Calling Levi was how they supported their families. But they stepped out and trusted God.

LifeHouse members are primarily young families with children, mostly in their 30’s. There are also some seniors who attend.

They intentionally reach out to their community. Members recently manned a booth and gave out 250 Bibles at a local peach festival. They partnered with a public school to facilitate a field day for the students and sent cupcakes to teachers and staff at local schools. This month they are partnering with students from Liberty University to host a trunk or treat event for the community.

The church used the name LifeHouse when they were hosting a Bible study and after praying about the church name, they felt led to keep it. It’s based on John 10:10b, “…I came that they may have life, and have it abundantly.”

“We saw neighbors muddling through, going to work, coming home, struggling…simply existing,” Lashey said. “Our burden has been for them to know and experience the life that can only be found in Christ, abundant life.”

Lashey believes that God had LifeHouse Church planned all along, and used their time and experiences traveling as Calling Levi to prepare them for starting this church “…for such a time as this” (Esther 4:14).