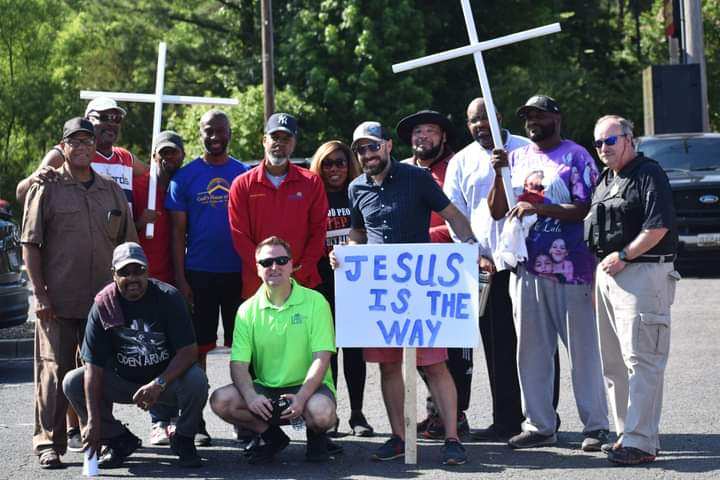 “Yet he has not left himself without testimony: He has shown kindness by giving you rain from heaven and crops in their seasons; he provides you with plenty of food and fills your hearts with joy.” (Acts 14:17)

On Sunday, August 28th, Emmanuel Baptist Church in Gambrills, had an anniversary celebration for Pastor Robin Shifflett and his wife Margaret. Robin pastored the church for 37 years.

Church members enjoyed sharing and honoring the couple with gifts and words of encouragement. Members told stories about the couple’s kindness, their love for his congregation and community, and their faithfulness to God.

Robin made a confession of faith at Carrollan Woods Baptist Church in New Carrollton under the leadership of William “Bill” Viel. He pastored throughout Maryland/Delaware and began the Inner Harbor Ministry. Robin said Viel mentored him and taught him to be led by the Holy Spirit.

“My ministry has always been focused on having people walk in the Lord — to be Spirit-led. If Christians are living in a relationship with Jesus every day, He will tell them what He wants them to do. If He wants you to call someone or send a greeting card — whatever He wants you to do, the Holy Spirit will lead and guide you.” Robin said when visiting church members, the whole emphasis isn’t pushing them to come back to church. Instead, he focuses on their relationship with Jesus. “My emphasis has been ‘are you walking with the Lord, spending time in prayer, and in devotions,’” he said, which often results in them returning.
Reflecting over the years, Robin said some of the highlights included working with five other churches in an interdenominational outdoor worship experience. They also worked together to reach their community through a Jesus Video ministry, meeting and talking with people, and giving away free videos. Members served in camp ministry in Ocean City with former Leisure Minister Lynn Davis. There were many others.

Robin and Margaret plan to stay at the church. They are both Sunday School teachers and they’ll continue in those capacities and serve in other areas as needed.

First Baptist Church of Havre de Grace (FBC Havre de Grace) had a retirement dinner for Ron Smith and his wife, Fern, in April at the Vandiver Inn. At Smith’s request, BCM/D  Evangelism and Church Consultant John Gauger, and John Manry, the pastor of North Harford Baptist Church were the guest speakers. “Both men have been encouraging and affirming of me through my time as pastor. They are very wise and Godly. I was blessed,” he said.
Deacon Jerry Wiggins was the emcee. “He did a little roasting, but not too much,” Ron chuckled, adding that he was touched by the love of the congregation. “Church families sent us little recognition cards, commending and encouraging my wife, Fern, and me.”
Ron and Fern served the church from 1998 – 2022. He pastored in Utah for a decade before coming to Maryland. During his tenure at FBC Havre de Grace, the church completed a building project started in 1983, improved stewardship, and increased participation in outreach and mission. Members took mission trips to Moldova, Mexico, China, the Philippines, Dominican Republic, Canada, Pennsylvania, and Ocean City.

Locally, they helped with transitional housing and ministering to those who are in need. They’ve also had “biker” worship services and family festivals.

“We’ve had challenges, but we’ve walked through them together,” Ron said. “We’ve been incredibly blessed.”

Ron is now available for pulpit supply. Email him for more information.

Note: If your pastor has retired recently or is planning to retire soon, please email us with an announcement at info@bcmd.org.

Lexington Park Baptist Church (LPBC)  is hosting an event called “Release the Peace” from 2-5 p.m. on Oct. 9. Pastor Chris McCombs explained St Mary’s County has lower crime statistics compared to other areas, but there has been growing violence including gang shootings and murder. Police recently found a shallow grave near LPBC where a mother and child were buried.

The Rev. Charlie Wharton, a chaplain with the St. Mary’s County Sheriff’s Office and liaison for local churches, called local pastors and, voicing his concern, asked,“ Where’s the church? “Where’s the moral voice?” How were local churches going to respond?”

McCombs said there is a strong interdenominational, multi-ethnic and racial group of pastors who work together, “The Christian Fellowship of St.Mary’s County,” who rallied in response to the need. On a Sunday in March, a group of chaplains and pastors from the group spoke at a rally outside of Great Mills High School, praying and speaking against the violence.

Then, in June, they had a “Walk for Peace,” and about 60 people marched up and down Great Mills Road, where most of the violence has been occurring. Potomac Baptist Association Director of Missions Fred Caudle joined the march.

At the upcoming “Release the Peace” event, McCombs said there will be food, games, bounce houses, and more fun for families. In addition, many community agencies will be represented, including the local food bank, representatives from emergency medical services, police and fire companies, and churches. There will also be scripture reading, exhortations, prayer, and multiple bands.

Members and friends of The Christian Fellowship of St.Mary’s County had a “Walk for Peace” up and down Great Mills Rd, an area where much violence has occurred. (photo courtesy of Chris McCombs)

McCombs said the “Release the Peace” is a big event to bring awareness to the problem and seek peace, but it’s not the end. “It will hopefully be a catalyst for other things to come. We want to build momentum from this.

“We pray that God will release peace over lives and over the community,” said McCombs.

“Our greatest fear should not be of failure, but of succeeding at something that doesn’t really matter.” D. L. Moody

Sept. 22 — BCM/D Town Hall Meeting — Join us from 11 a.m. – 1 p.m. for a time of communication, collaboration and celebration. We’ll celebrate what is going on in our two-state convention and eleven associations. We’ll communicate with one another specifically about things that have a direct impact on our convention as a whole. Our goal is to have proposed resolutions and proposed changes to our constitution available for discussion. This gives us time to deliberate and refine these items prior to our Annual Meeting. We will not only discuss resolutions, motions, and proposed constitution changes designed to help us work more effectively, but we will also hear about other opportunities to partner together.

Oct. 8 — AAF Presents BCM/D Pathways: Prevention and Protection — We all know that physical, sexual, and emotional abuse occurs regularly, and the church is not immune to this sin. Most of us don’t know how to handle it when it happens, and many churches aren’t equipped with policies or resources to deal with sexual assault or other kinds of abuse. This training session will help equip you with knowledge about how abuse occurs among vulnerable people groups who may be more susceptible to harm from others inside their communities