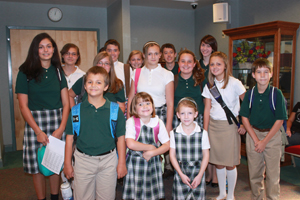 Students prepare for their first day of the 2012-13 school year at Oak Grove Classical Christian School.

BEL AIR, Md. — Oak Grove Classical Christian School, which meets at Oak Grove Baptist Church, started its second year of classes this month. This year’s students will continue to build on the “firsts” of last year.

The school graduated its first class of nine students in May. The seniors are all attending their top choice colleges, and between them were awarded over a million dollars in merit and need-based aid. Graduation was the culmination of a whirlwind year that included a 10-day trip to Europe and defense of their senior thesis projects.

The students, who also described their year at Oak Grove as their “best year ever,” took high level academic courses such as calculus, anatomy/physiology, and apologetics from teachers committed to teaching in a classical school with a Christian foundation.

“The students began their year with service projects, and continued to create a legacy of servant leadership throughout the school year,” said Debbie Glasgow, Educational Director of the school. “The students founded the first Student Government Association, were leaders on the volleyball and basketball teams, and even led a middle school soccer camp for the younger students this spring. The older students were also involved with planning many fun social events for the school, such as a family game night, movie night, and field day. The younger children looked up to the older students, and felt a closeness and affection that was very unique and special.

Commencement was the highlight of the year. In his baccalaureate address, Dr. David Hall, Oak Grove Church’s Senior Pastor, told the audience that he had been praying for a school for 18 years, Glasgow said. A week later, the class of 2012 salutatorian, Alisha Benedetta, surprised fellow graduates and family in her speech by pointing out, “Dr. Hall was praying for us – that was us!”

The school is very grateful for the support of Oak Grove Baptist Church, particularly Pastor Hall and Pastor Trey Wooton, Minister to Children and Senior Adults, who has served as the church’s liaison to the school. “Although the school is non-denominational and a separate entity from the church,” Glasgow said, “members of Baptist churches would feel very comfortable sending their children to the school.”

In the 2011-12 school year, God provided 98 students for the PreK-3 through 12th grade program. “The school’s commitment to a classical Christian education ensured that the students received a strong academic program that was truly integrated with the truth of our Christian faith” said Glasgow, a member of Long Green Baptist Church. “It was gratifying to witness God’s many blessings and see so many students flourish in their scholarship and faith.”