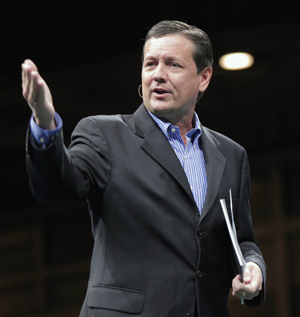 Kevin Ezell, president of the North American Mission Board, speaks during a June 18 Send North America luncheon in New Orleans. The theme of the lunch was 'Building Vision and Celebrating Missions in North America.' Photo by Susan Whitley.

NEW ORLEANS (BP) — North American Mission Board President Kevin Ezell, at the Send North America luncheon June 19, thanked churches for their Annie Armstrong Easter Offering gifts in 2011 as NAMB leadership cast a vision for every church to be a part of church planting.

“In a time of transition when many predicted the Annie Armstrong offering might be hurt or would go down, God blessed it in an incredible way through your generosity,” Ezell said, noting that the 2011 offering was 3 percent over the previous year.

NAMB leaders, at the luncheon held during the Southern Baptist Pastors’ Conference prior to the SBC annual meeting in New Orleans, encouraged every pastor and every church to connect with the North American mission field.

Aaron Coe, NAMB’s vice president for mobilization and equipping, told attendees that the mission board’s goal is to see the number of Southern Baptist congregations grow by a net gain of 5,000 by 2022. Because the convention loses an average of 890 churches a year, Southern Baptists will need to plant a total of 13,500 during that 10-year span to reach the goal.

If Southern Baptists meet the goal, it will be the first time in 110 years the convention has planted churches at the same rate as the population growth, Coe said.

“This is something we all can do,” Coe said. “But it’s not just one of those things where a few of us can get into the game. It’s going to require all of us — all of us banding together under the lordship of Jesus Christ, all commissioned by Him through the Great Commission, banding together to seek out lostness wherever it exists in the North American context. Working together to penetrate lostness, we’re going to see amazing things happen. But we need all of you to participate.”

Ezell gave special recognition to churches that gave the most to the Annie offering in both overall giving and per-capita giving in their associations. The top 50 churches in the nation overall in giving to the offering were also recognized.

The Baptist Convention of Maryland/Delaware was also recognized as having seen the fastest start to church planting in history with more than 30 missions started the first six months of 2012.

“Our pastors are also recognizing the importance of the vision Kevin Ezell has put forth,” said Milton A. Hollifield Jr., executive director-treasurer of the Baptist State Convention of North Carolina. “It’s a practical way to help state conventions, associations and churches understand what the needs are and also how attainable these goals are in starting the number of churches we need to be starting in North America.”

Hollifield noted that besides North Carolina’s sizeable investment in the Annie Armstrong Easter Offering, the state has committed to playing a significant role in Send North America, NAMB’s strategy for connecting churches to church planting and other missions endeavors throughout North America.

Coe made it clear churches play the primary role in reaching North America.

“The question is, what can NAMB do to help, as you seek to penetrate lostness in North America? We want to come alongside of you as you fulfill your mission in North America,” Coe said.

Tobin Perry is a writer with the North American Mission Board. Mickey Noah also contributed to this report.