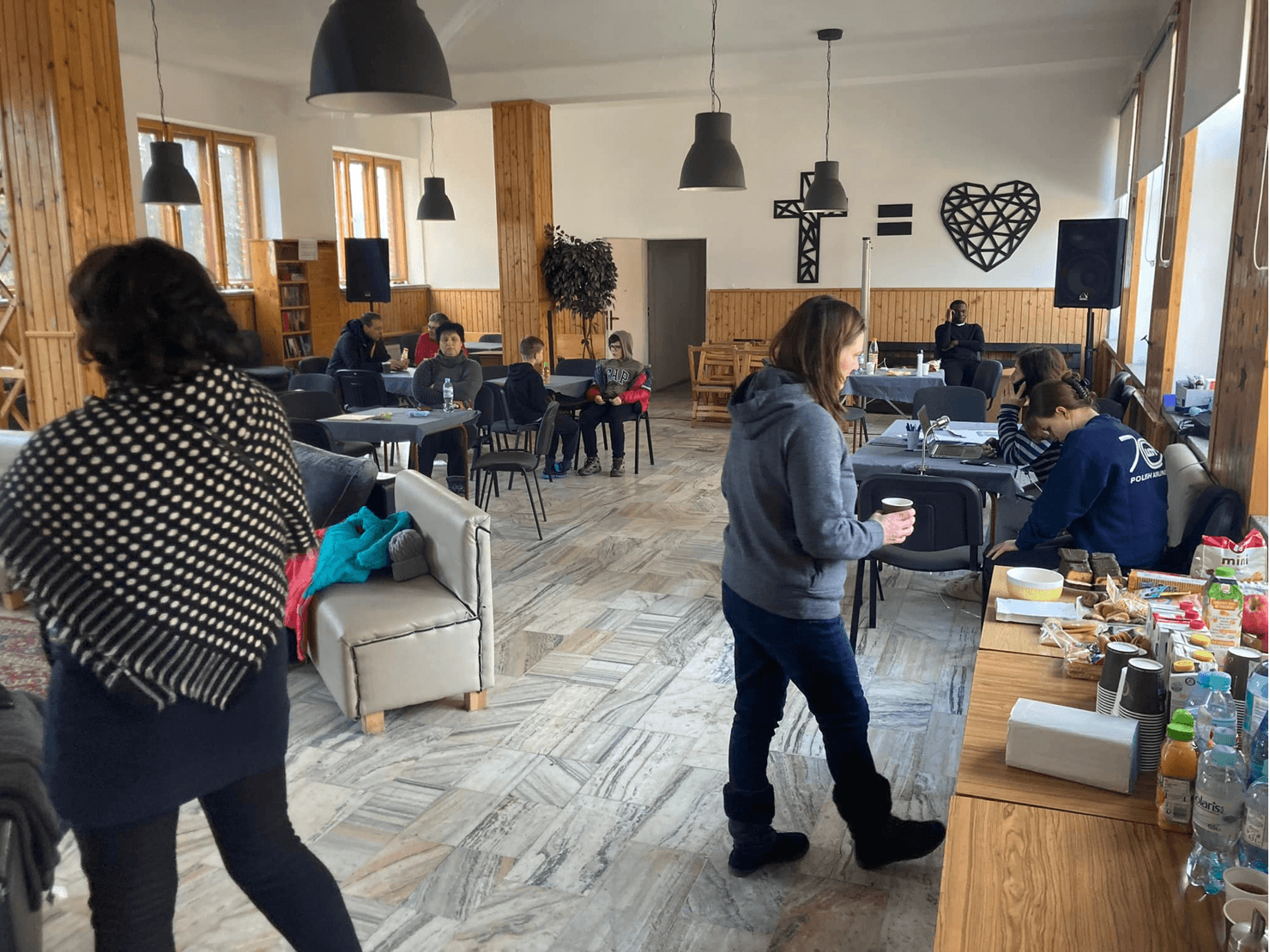 Polish Baptists and International Mission Board (IMB) missionaries quickly rallied to respond to the needs of Ukrainian refugees crossing the border to seek sanctuary from the attack on their homeland.

The Polish Baptist Union initially hoped to house 500 refugees. They have since doubled that number to 1,000. Eight centers were designated to receive refugees, but Baptists increased the number to 40 camps located across Poland.

The Krauses said the Polish Baptist Union is outfitting the camps with sheets, pillows, food, and hygiene items. SR funds are being used to support these efforts, as well as transportation needs.

IMB missionary Ken Brownd said First Baptist Church of Gdasnk (FBCG), Poland, committed to hosting one of the centers to receive refugees. Brownd said a church member recently moved into a new house and his old home, which is next to the church, is being prepped to house refugees. The church also converted a youth room and a meeting room into a shelter for refugees.

Members of FBCG drove to the border of Poland and Ukraine to receive women and children. Church members formed relationships with these women and children through summer camps. For years, the church sent teams to a city in western Ukraine and hosted Vacation Bible Schools.

The church members waited, and slept, in the van for hours at the border, as hotels were booked in the area, with no word from the women and children. Lines at the border were rumored to be around 10 kilometers long and a 15-hour wait. Over the weekend, five women and children arrived at the church, and others traveled to other Baptist camps. Another 18 refugees are in transit to FBCG.

A hallway in a Polish Baptist Church has become a bedroom, ready to receive refugees. Photo courtesy of Chelm Baptist Church, Poland. Used by permission.

Bailey said other Polish Baptist churches and individuals have and will provide transportation for refugees.

A Baptist church in the city of Chelm posted on their Facebook page that they have already sheltered 120 refugees. Church members remain on duty 24 hours to receive refugees. Hotels, businesses, and individuals have joined the efforts to help the church by providing food, mattresses, and bedding.

Brownd said Polish Baptists are using social media to organize the collection of supplies, and the response has been enthusiastic and generous.

“It’s just cool to see Polish Baptists stepping up and taking care of their neighbors. They’ve done that for a long time now, but this is a different level,” Brownd said. “Our team is trying to organize the SR help … but really, this is mostly driven by Polish Baptists, so we’re not the main players in this at all. We’re helpers, and so it’s amazing.”

Nightly prayer meetings are being held at FBCG. Polish and Ukrainian Christians have come together, and services are held in both languages. Poland is home to a significant population of Ukrainians, many of whom moved to Poland after unrest and conflicts in Ukraine in 2014. Many, if not all, of the Ukrainians in Poland have family members still living in Ukraine.

Josh said he’s encouraged by the “cooperation and the brotherhood between the Ukrainian Baptists and the Polish Baptists here and the way they’ve worked and gotten together. Everyone is coming together to say that we’re with our Ukrainian brothers and sisters.”

“Whenever there is a new crisis, everybody rallies. As we’ve been working with the [Polish Baptist] Union and with different churches, we’ve seen their desire currently just to serve, to support, to love on their brothers and sisters from Ukraine,” Bailey said.

Bailey asked for continued prayer for Polish and Ukrainian Baptists in the weeks and months to come.

“Our prayer is that the churches would be praying for perseverance because, in two weeks, this is still going to be here. This is a new reality, not just for Ukrainian people, but also for the Polish people, and so [pray they will] handle that new reality well and with grace and patience,” he said.

Brownd asked for prayer for refugees who left behind family members. Men, ages 18 to 60, must remain in the country according to Ukraine’s declaration of martial law.

Josh and Bailey said their prayer is for the Lord to work in mighty ways during this time of crisis.

“The church in Ukraine is thriving and doing great and so, through this, I really hope that not only the believers and the churches in Ukraine come out even more strong and on fire, but the Polish churches, that they too would catch that and grow. The Lord can do great things out of destruction,” Bailey said.

Your gifts to SR are already providing emergency food supplies, shelter, and clothing to displaced families. SR partners will continue to provide food relief, continue meeting shelter needs, and offer transportation to those impacted by this crisis.

Caroline Anderson writes for the IMB and SR.

Cover photo: Christians in Polish Baptist churches work in shifts so they are ready to receive refugees 24 hours a day. Photo courtesy of Chelm Baptist Church, Poland. Used by permission.

If you would like to support relief efforts for Ukrainian refugees, you can visit the Baptist Convention of Maryland/Delaware’s (BCM/D) giving portal. BCM/D has also developed a prayer guide that you can use for personal, group, and corporate intercession.