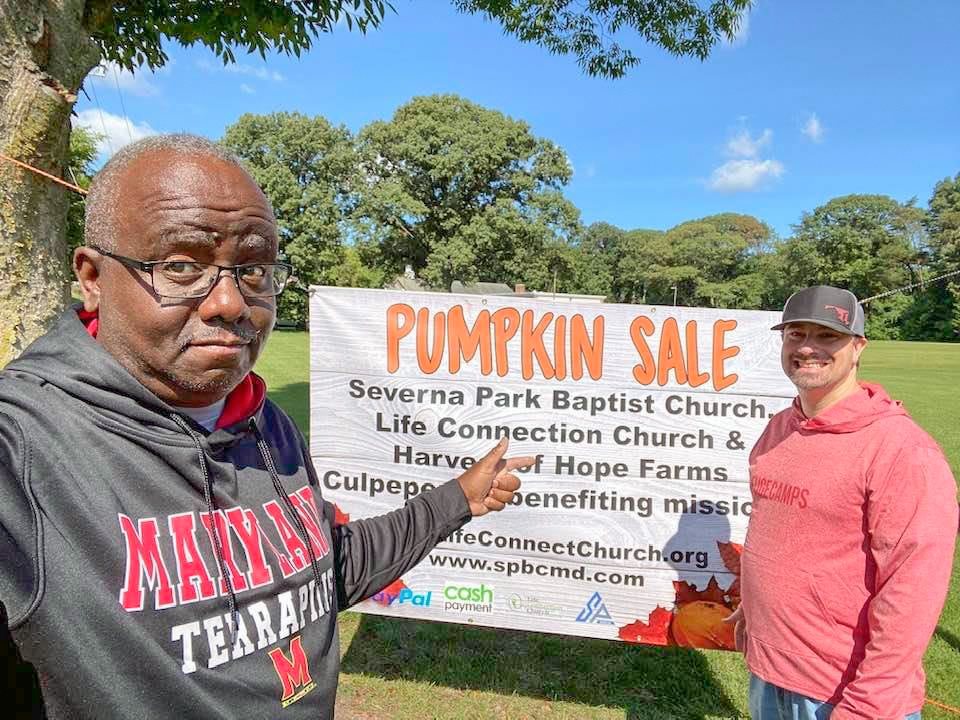 Life Connection Church (LCC) and Severna Park Baptist Church (SPBC), with the support of Community Bible Church (CBC) in Manassas, Virginia, are partnering to sell pumpkins to raise funds for missions. Over 7000 pounds of pumpkins are scattered across the field at SPBC’s lawn. In addition to raising funds, the project gives churches a chance to reach out to their community and meet their neighbors.

LCC Pastor Martin Bennett shared that the pumpkin outreach began with John Clark, a dear friend, and brother in Christ. Bennett, along with his wife, Demetra, used to serve with Clark at CBC. Martin was the youth minister. The men kept in touch through the years but Martin was quite surprised when Clark called offering literally tons of pumpkins.

Clark and his wife, Luci, were inspired by the story of NFL defensive lineman Jason Brown, who, after signing a $37.5 million contract, ended his football career early in obedience to God’s leading. In an ABC interview, Brown said he asked Jesus what he could do with the blessings he had been given. “The answer he heard: ‘I want you to feed My people.’” Brown purchased a farm in North Carolina and gives the food away to people in need.

The Clarks prayerfully decided to follow Brown’s example. In addition to John’s job as CEO of the National Center for Missing and Exploited Children, they purchased and run a 160-acre farm which they call Harvest of Hope. The Clarks now use their farm to support local food banks and help those in need and support missions, ministries, and churches. Several months ago, John called Marty to offer the pumpkins, and Marty contacted Pastor Dave Brown, his close friend at SPBC, to discuss partnering.

LCC and SPBC have partnered for missions for several years, including the Messiah Project in Nicaragua, trips to the Dominican Republic, and missions collaboration in the Caribbean. A joint pumpkin sale was a natural extension and will provide funding for future mission trips.

Volunteers from LCC and SPBC are working on a rotational schedule to greet their neighbors and sell the pumpkins.