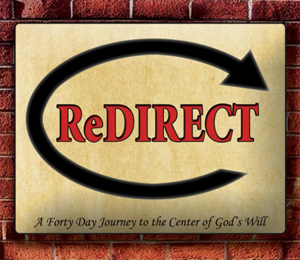 BERLIN, Md.—Daryl McCready admits he was intrigued and personally challenged when his fellow pastor friend and accountability partner talked about fasting.

Bryan Pugner, pastor of The Worship Center, an Assemblies of God Church, in Berlin, Md., had spoken several times about how he had fasted for 21 days during the first 21 days of the year. Pugner even considered writing a booklet about it.

McCready, founder and pastor of SonRise Church, also in Berlin, felt God “placed it on his heart to lead his church in a 40-day fast this lent season.” He introduced his idea to SonRise’s team of pastors, who readily agreed to try it. And so “A Forty Day Journey to the Center of God’s Will” was born.

“But not without me,” Pugner said when McCready told him.

The organizers named the effort, ReDIRECT, emphasizing that the fast is intended to change one’s focus “from the things of the world and redirect them to the things of God.” Over the 40 days, church members will spend time praying and thinking about things that matter to God.

To assist those participating in the fast, they have been given a ReDIRECT journal, which provides daily scripture readings, prayer focuses, action steps and fasting goals. The journal was created through a cooperative effort by all the pastors of the participating churches.

During Week One, participants are encouraged to skip one meal a day and replace the time that would have been spent in purchasing, preparing and eating with devoted time to God.

During Week Two, participants fast for boldness in sharing Christ with others. They set aside at least 30 minutes a day to serve and share with others for the purpose of demonstrating and sharing the Gospel.

During Week Three, while fasting for the poor and hungry, participants will eat only rice and beans in solidarity with those who are in poor nations. “What seems like major sacrifice for us for one week is a daily reality for billions,” says the guide.

During Week Four, participants fast for the family by fasting from all media and technology and “redirecting” that time to reconnecting with God and each other.

In Week Five, while fasting for health, healing and wholeness, fasters seek to improve their physical, emotional, spiritual and relational health through a modified “Daniel Fast” (a popular fast based on the Old Testament’s Daniel, who consumed only vegetables and water).

And finally, in Week Six, participants will observe a “Disciples/Jewish Fast, fasting daily from sunup to sundown, seeking God for personal, local and national renewal by humbling themselves, seeking God’s face, confessing their sins, repenting and turning from their wicked ways.

Forty days was chosen because this period of time often represented cleansing and purification throughout scripture—“long enough to produce lasting change, but short enough to be attainable for all!”

The 40 days will culminate with two joint worship services at Stephen Decatur High School on April 1, which is Palm Sunday, the week before Easter. Each church will share a role in leading that day’s services. Ron Larson, of 365 Church in Martinsburg, W. Va., will share a keynote message on continuing the focus.

In explaining why he felt drawn to the fast, McCready shared, “We recognize that our world and community are hurting and don’t really know where to turn. We think our churches are [the answer] but the reality is that we are not the answer—Jesus is!”

That point has hit him hard lately. He was working on a sermon series entitled, “Follow Me,” which was part of SonRise’s 2012 emphasis dedicated to learning what it means to be a true disciple. “It was exciting until I started preparing my messages”—which he had named “Taking Jesus to work” and “Taking Jesus home,” McCready said. “As I prepared, I felt the Lord saying to me, “Wait a minute, pal, you don’t take Me anywhere. You follow Me.”

That message resonated in McCready’s heart as he realized, “Sometimes we highjack the Kingdom of God from Jesus Christ!” He was moved to discover more about what it meant to “take up his cross, deny himself, and follow Jesus” (Luke 9:23), which prompted the fast.

McCready is quick to say he expects big things to happen during these 40 days and beyond. In fact, he’s asked God to reveal His supernatural power as shown in Acts 4.

“I want to see God’s power like that—it was uncomfortable, supernatural, unexplainable. That’s what ignited the early church,” he said. “I’m expecting to get to the end of this thing and say, ‘Look at what God did!’”