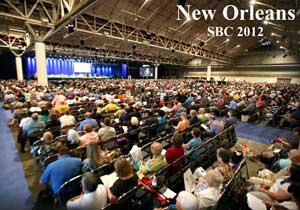 More than 7,800 messengers attended the 155th Southern Baptist Convention annual meeting in New Orleans, participating in a historic vote for the first African American president, Fred Luter Jr. The theme of the convention was 'Jesus: to the Neighborhood and the Nations.' Photo by Van Payne.

NEW ORLEANS (BP) — In one of the most historic meetings in the Southern Baptist Convention’s 167-year history, messengers meeting June 19-20 elected the body’s first African American president and voted to keep the convention’s name while approving a descriptor, “Great Commission Baptists,” for those churches that wish to use it.

The momentous occasion in New Orleans brought media from across the nation to see the election of Fred Luter, a descendant of slaves who now is the president of a convention whose founders, in 1845, defended slavery.

The convention officially repented of its racist past at the 1995 meeting, and has seen the percentage of non-white churches grow, from 5 percent of the SBC in 1990 to 19 percent in 2010. Last year, messengers approved a landmark report encouraging ethnic diversity in committee appointments.

Luter, who was unopposed and received a lengthy standing ovation from messengers when elected, told media at a news conference that he sees his election as being a turning point for blacks and other ethnic groups.

“Here is a convention that has been talking this racial reconciliation thing and now they’re putting their money where their mouth is,” said Luter, pastor of New Orleans’ Franklin Avenue Baptist Church, whose building was flooded after Hurricane Katrina but has been rebuilt into a mega-church amid the city’s much-reduced population.

Luter called his election “a genuine, authentic move by this convention that says our doors are open.” He also said he hopes to see minorities promoted to other positions within the convention, “and I’ll be a cheerleader promoting that.”

About 7,900 registered messengers attended the annual meeting, and nearly every one of them — plus family members and several dozen media representatives — were in a packed convention hall when Luter was elected. New Orleans pastor David Crosby nominated Luter, and recording secretary John Yeats cast the convention’s official ballot.

“It is my high honor to cast this historic ballot of the convention for Dr. Fred Luter as president of the Southern Baptist Convention,” Yeats said before adding, “Hallelujah!”

Yeats’ expression seemed appropriate for a historic day, and messengers responded with an emotional 70-second standing ovation. With cameras flashing as Luter walked to the podium, he pointed heavenward and, while wiping away tears, said simply, “To God be the glory for the things that He has done.” Outgoing SBC President Bryant Wright then put his arm around Luter and prayed for him.

Luter’s election came with a historical coincidence: He was elected on June 19, or “Juneteenth,” a yearly date in which many African Americans celebrate the emancipation of slaves. His election also came as Americans commemorate the 150th anniversary of the Civil War.

“This is not just an Anglo convention,” Luther told media members. “… I’m Exhibit A that this convention is serious about saying that our doors are open to everyone. I hope to be a spokesperson to that, because let’s face it: There are some African Americans, maybe Asians or Hispanics who for years felt that they were not welcome in the Southern Baptist Convention. That’s not the case anymore.”

Two days prior to Luter’s election, several hundred Southern Baptist messengers visiting New Orleans — most of them white — attended Luter’s church, wanting to see him and the congregation he had helped rebuild. At the close of the second service, Luter called on Jimmy Draper, former president of LifeWay Christian Resources, to pray. Prior to his prayer Draper addressed Franklin Avenue church members, referencing Luter’s pending election and telling them to applause, “This is not tokenism. … We’re electing a great leader who happens to be black.”

The convention has made several moves in recent years in an attempt to reach out to ethnic groups, including the establishment — by the Executive Committee and the North American Mission Board — of an African American Advisory Council and a Hispanic Advisory Council. Last year’s ethnic diversity report cited the “need to be proactive and intentional in the inclusion of individuals from all ethnic and racial identities within Southern Baptist life.”

Jessie Arce of Healing Water Bible Church International and Samuel Nuon of First Cambodian Baptist Church were featured in NAMB’s “The Faces of the SBC” exhibit.

Byron Day of Immanuel Baptist, Laurel, MD and Ellis Prince of Gallery Church, Baltimore, served on the 2012 Committee on Committees.

Dennis Kim of Global Mission in Silver Spring, MD, served on the 2012 Committee on Resolutions.

Sherry Lee was selected to be on the board of officers for the 2014 Ministers’ Wives’ Luncheon.

Gayla Parker, executive director of Maryland/Delaware’s WMU, signs her book, “Active Compassion: A Calling to Care,” during the annual WMU missions celebration and annual meeting held prior to the annual meeting of the Southern Baptist Convention in New Orleans, La.

Other Maryland/Delaware messengers were elected to serve as SBC committee members and trustees:

Brian M. Corrick of Nanjemoy Baptist was elected to served as an Ethnics and Religious Liberty Commission trustee.

Cecil B. Cunigan of Colonial Baptist, Randallstown, MD, and Nelson Miles of Friendship Baptist, Sykesville, MD, were elected to serve on the 2012-2013 Committee on Nominations.

David A. Hall of Oak Grove Baptist, Bel Air, MD was elected to serve on the SBC Executive Committee.

Bob Simpson of The Church at Severn Run, MD, was elected to serve as a LifeWay trustee.

Victor Simpson of Emmanuel Baptist in Huntingtown, MD, was elected to serve as a Golden Gate Seminary trustee.

Kevin Ezell of the North American Mission Board recognized the Baptist Convention of Maryland/Delaware as seeing the fastest start to church planting in history with more than 30 missions started the first six months of 2012. David Lee, BCM/D Executive Director, was also recognized because the Baptist Convention of Maryland/Delaware (a convention of fewer than 500 congregations) was the top giver to the Annie Armstrong Easter Offering.

Passage of the descriptor “Great Commission Baptists” also was momentous, although the vote total was closer than some had expected. The proposal came via a recommendation from the Executive Committee, which had proposed it after a task force — appointed by Wright — studied whether to change the name of the convention. In the end, the task force recommended the convention keep its name but also adopt a descriptor, “Great Commission Baptists,” that can be used by any church. Usage is voluntary.

Messengers debated the descriptor for about a half-hour before approving it, 53-46 percent.

The task force said the descriptor would be beneficial to churches and church planters outside the South — some planters say the convention’s regional name is a barrier — as well as to ethnic churches whose members might view the name “Southern Baptist” negatively.

The issue of Calvinism also was addressed from the platform several times, with each speaker urging messengers to remain united for the Great Commission. Executive Committee President Frank Page — who said he’s not a Calvinist — addressed each side of the debate. He told the non-Calvinists: “There seems to be some non-Calvinists who are more concerned about rooting out Calvinists than they are about winning the lost for Christ.” He then addressed Calvinists, some of whom he said “seem to think that if we do not believe the same thing about soteriology that they believe then somehow we are less intelligent or ignorant.” Soteriology is the study of the doctrine of salvation.

“I do believe we can find some ways to work together better,” Page said, “and I believe that the leaders of both of these groups can come together to say, ‘Here’s how we can return to working together like we once did.'”

Page confirmed again that he plans to assemble a group of advisers to help chart a way through the division surrounding Calvinism. But that will not include revising the Baptist Faith and Message, Southern Baptists’ statement of beliefs, he said.

Wright also addressed the issue in his convention sermon.

“Our calling is to be centered on Christ and grounded in the Word, while agreeing to disagree on the finer points of theological issues,” Wright said. “May we all agree that Christ … has given us a very clear message and mission for the church.”

Wright added, “If we pride ourselves more on being a traditional Southern Baptist or more on being a Calvinist or a Reformed theologian, more than we are thankful that we are Christ-centered and biblically based … then it is time to repent of theological idolatry.”

Messengers also overwhelmingly passed a resolution “On Cooperation and the Doctrine of Salvation,” which said in part, “We affirm that The Baptist Faith and Message provides sufficient parameters for understanding the doctrine of salvation, so that Southern Baptists may joyfully and enthusiastically partner together in obedience to the Great Commission.”

— More than 1,100 decisions for Christ were made during Crossover, the yearly evangelistic emphasis prior to each annual meeting.

— International Mission Board President Tom Elliff reported on the progress of IMB’s Embrace challenge, issued at the 2011 SBC in Phoenix, where he called on Southern Baptist churches to claim responsibility for evangelizing all of the world’s then-3,800 unreached, unengaged people groups (UUPGs). He said 1,281 Southern Baptist churches and entities have indicated an interest in embracing a UUPG. Of that number, 474 churches and entities have taken steps to go deeper in that commitment. “It means some of you are taking this really seriously, and you’re saying we want to count the cost, we want to see what’s involved,” Elliff said. “I want to tell you on behalf of the International Mission Board, we’re absolutely thrilled. We welcome you to the field, we rejoice that you’ve taken up this mantle and we praise God that the Kingdom is being expanded because of your involvement.”

— North American Mission Board President Kevin Ezell encouraged congregations to get involved in planting churches and supporting church planters. To underscore the urgency he quoted statistics showing that in some states in the Northeast, Midwest and the Northwest, there is only one Southern Baptist church for every 20,000-plus people. In Canada, it’s one in 117,000, he said. By comparison, the ratio in the South is one in less than 10,000. “Church planting is an evangelistic strategy,” Ezell said. NAMB has a goal for Southern Baptists to plant a net of 5,000 new churches by 2022, Ezell said. When including churches that die each year, that means Southern Baptists must plant 13,500 new churches. “We will never be able to plant that many churches unless God does a work in His people,” Ezell said.

A resolution on the sinner’s prayer said the prayer is “not an incantation that results in salvation merely by its recitation and should never be manipulatively employed or utilized apart from a clear articulation of the Gospel.” It further said that messengers “promote any and all biblical means of urging sinners to call on the name of the Lord in a prayer of repentance and faith.”

A resolution on gay marriage and civil rights rhetoric declared: “We deny that the effort to legalize ‘same-sex marriage’ qualifies as a civil rights issue since homosexuality does not qualify as a class meriting special protections, like race and gender.” The resolution also said messengers “stand against any form of gay-bashing” and that messengers “express our love to those who struggle with same-sex attraction and who are engaged in the homosexual lifestyle.” The resolution was submitted by two African American pastors.

Michael Foust is associate editor of Baptist Press. With reporting by Erin Roach of Baptist Press and Don Graham of the International Mission Board. Get Baptist Press headlines and breaking news on Twitter (@BaptistPress), Facebook (Facebook.com/Baptist Press) and in your email (baptistpress.com/SubscribeBP.asp).