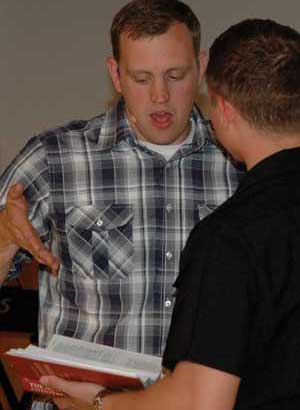 ANNAPOLIS, Md.— College years are the most critical decision-making time in a person’s life—the time when most people decide what career path to take, whom they will marry, how many children they will have, and if Justin Woods has his prayers answered—whether or not they will become followers of Christ.

Accordingly, Woods’ mission is to “glorify God by making Gospel-centered, Bible-focused disciplemakers” on one of the most strategic, prestigious campuses in the world—the United States Naval Academy.

Since its inception, the Annapolis Baptist Collegiate Ministries (BCM) has strived to meet the spiritual and mentoring needs of hundreds of midshipmen at the Naval Academy. The ministry is a vibrant group of young men and women who desire to see the name of God glorified and to impact the world for the sake of the Gospel.

Woods, who also is currently serving as a reserve chaplain in the U.S. Air Force attached to the 459th Air Refueling Wing, Joint Base Andrew, began his ministry at the BCM in the fall of 2010. There were around 19 midshipmen involved.

Now, there are around 100 participants with an average of 75 people attending the large group meeting, with the “pretty big change” just occurring in recent months.

Woods believes this increase is due to his intentional talks about growth and his commitment to tie everything around scripture,  and in particular, as he worked through the New Testament book of James, which he calls a “bold, in-your-face text.”

“They are not interested in ‘Christianity Lite.’ They are studying deferential equations in Calculus; they can handle the deeper topics,” Woods said, adding he seeks to build, Lord willing, a growing conviction in the men and women as they discuss the brokenness of sin, the brotherhood of the saints, and the splendor of God, amongst other topics.

Accordingly, many midshipmen say they know what to expect—they know it will be a bold conversation, and they will be fed with the uncompromising truth of the scripture, Woods continued. And they’re bringing their friends. “I’m being fed here. Why don’t you come, too?” he hears them say.

“I believe conviction is compelling. I teach the text authentically and deeply, and people are responding with conviction,” he said, adding he also teaches the midshipmen how to exposit the biblical text themselves.

“All they need to know to help others grow is to know the text. Observe it, interpret it, and apply it,” he said. The residual effect is causing ripples throughout the Academy.

“Four thousand guys live together, and they are always sharing,” he said. “They’re having Bible studies in their dorms.”

As a result, the midshipmen are rising up, “thirsty for more,” Woods said, noting the high level of expectation meets well with them.

“Midshipmen stereotypically are driven, competitive, capable,” he described. “They are statistically among the top one percent of high school graduates across the country. The average person is very smart, ambitious and success-oriented. Those are the traits the Academy searches for.”

This “will do” attitude carries over from the Bible studies and into ministry. “They are going to succeed, and they are going to be our future church leaders,” Wood asserted. “They don’t want to be the object of the ministry. They want to be caught up in something greater than themselves.”

This was clearly demonstrated this year when Second Class Midshipman Garrett Lane Gray chose to forego this year’s trip in January to the collegiate-focused Passion Conference in Atlanta, Ga.

“This time I wanted to seek God in a different way,” Gray said. “I wanted to take the love and the grace and the holy presence that I experienced last year, and demonstrate it boldly to our lost world.”

Instead of traveling to Georgia, he and 10 other friends found themselves in Dallas, Texas, ministering at a homeless shelter.

“We expected our comfort zones to be expanded; by the end of the week we had no comfort zones left,” Gray shared, noting he and his teammates took turns preaching in their services, sometimes twice a day, prepared and served breakfast and lunch to whoever came in, and even chased random homeless people down the street to make them sandwiches.

“We worked in their children’s ministry, we led worship three times a day, and we spent entire afternoons hanging out on the streets just talking and praying with the hopeless and forgotten. It was incredible!” he said. “Not only the fulfillment of serving others in the name of Christ, but seeing God move and feeling Him break your heart for the least of these, all the while growing closer and closer with the people around you.”

Woods knows that it has been a slow process, but over time, the BCM’s reputation is being built.  “We haven’t reached that critical mass yet, but we keep consistently looking at ways we can engage our context.”

He welcomes prayers for the ministry. In addition, he urges churches to help provide snacks or sweets for the midshipmen, which can be used during study times. Also, the ministry could use contributions toward the renovation of the BCM ministry house.