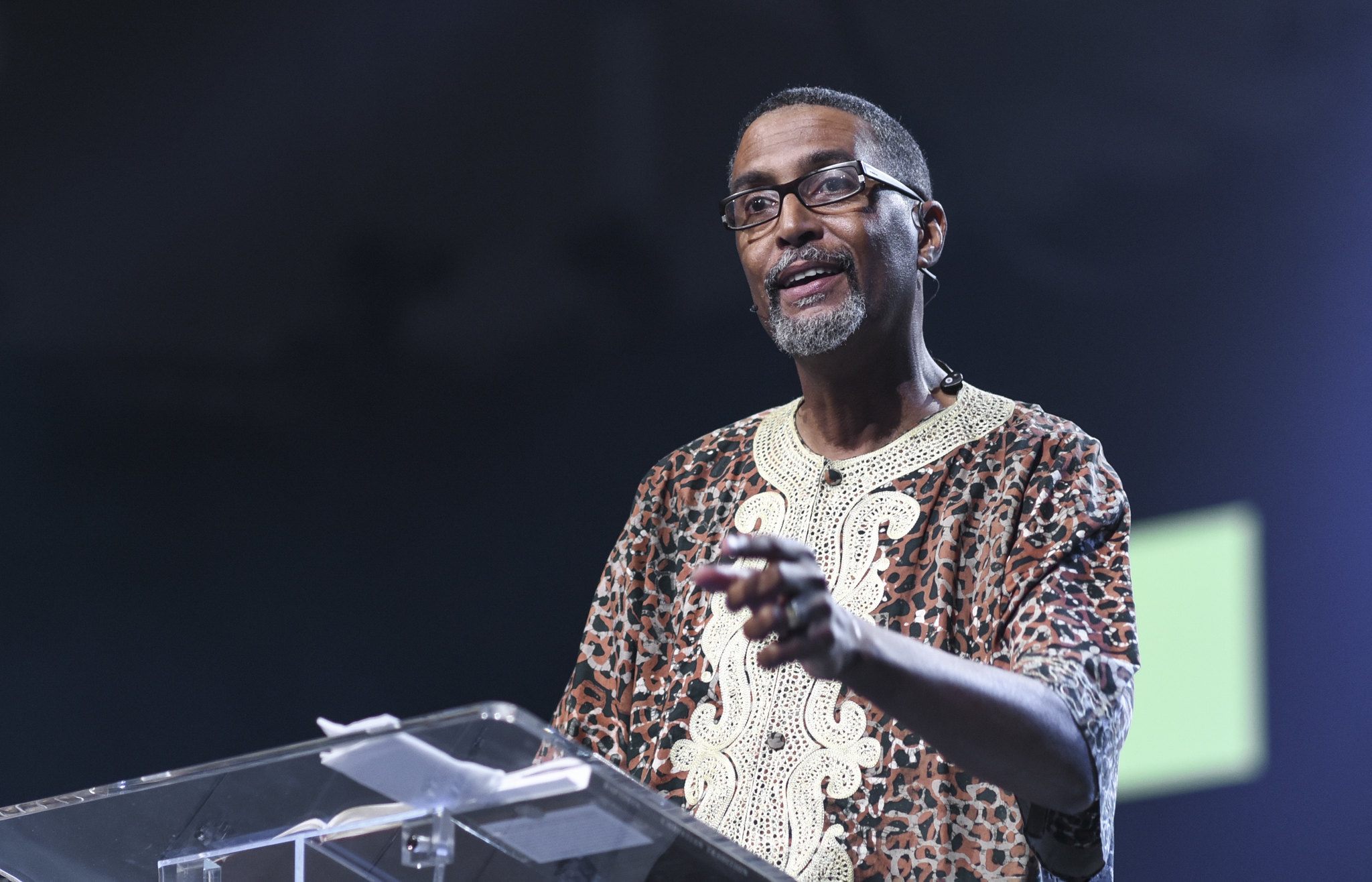 NASHVILLE (BP) – After featuring several prominent pastors and speakers from across the nation, the Send Conference concluded Monday evening, June 14. Jointly hosted by the North American Mission Board (NAMB) and the International Mission Board (IMB), the conference’s theme “Together on Mission” was designed to unite Southern Baptists around the Gospel.

Speakers, from Tony Evans on Sunday night, June 13, to David Jeremiah on Monday afternoon, emphasized the importance of Christian unity in the fulfillment of the Great Commission.

Evans, author and senior pastor of Oak Cliff Bible Fellowship in Dallas, spoke about how the Great Commission in Matthew 28 frames the way Christians are to operate as “Kingdom people” who both proclaim the Gospel and live out the transforming power of the Gospel in their everyday lives.

Hershael York, dean of the School of Theology at The Southern Baptist Theological Seminary and pastor of Buck Run Baptist Church in Frankfort, Kentucky, speaks during the morning session on June 14 of the Send Conference at the Music City Center in Nashville (photo by Eric Brown).

“Our true calling is not to be part-time saints but fulltime Christians pulling heaven down to earth as true reflections of the imago Dei,” Evans said. “We have watched our nation decline because there aren’t enough accurate reflections of Christ invading the culture.”

The next morning, Hershael York, senior pastor of Buck Run Baptist Church in Frankfort, Kentucky, opened his message at the pastors track session saying, “We are in a moment of humiliation. We tend to use the word unprecedented a lot these days, but whatever humiliation we feel is not unprecedented.”

York then read through a text rarely preached from: Psalm 44. In the passage, the people of Israel lamented over the apparent reality that God had abandoned them in rejection, but as he preached through the psalm, York pointed the pastors to Christ crucified.

“Because of Christ, we are not conquered,” York said. “We are conquerors, and God who remembers and keeps His covenant will be faithful one day to unite us there before the throne where He is going to wipe every tear from our eyes.”

Following York’s poignant description of what Christians’ heavenly unity will be like, Miguel Nuñez, senior pastor of International Baptist Church in Santo Domingo, Dominican Republic, pointed out the need for Christians to pursue that unity through the fulfillment of the Great Commission.

“To be together on mission,” Nuñez said, “we all need community with God, the power of the Holy Spirit, and we need humility in our relationships with each other.”

Gregg Matte, senior pastor of Houston’s First Baptist Church, spoke in his message of the need for intimacy with God before a pastor could ever attempt to obey the command to go into the world.

“I want us to get our hearts around this one phrase,” Matte said to open his sermon. “To faithfully go, we must humbly come.”

Christian Ramos and the Family Church band lead worship June 14 during the morning session of the Send Conference (photo by Eric Brown).

Comparing pastors who handle the Word of God to bankers or jewelers who get desensitized to the value of the precious things they handle on a regular basis, Matte encouraged pastors not to lose their awe of just how precious it is to encounter God through His Word.

Matte said, while preaching from Revelation 22, that he wanted pastors to remember one word from the message: “Come.” He called pastors not to let anything else get in the way of their coming to the Savior through His Word and through prayer.

After a break for lunch and NAMB’s Send Luncheon, Kevin Smith, executive director for the Baptist Convention of Maryland/Delaware (BCM/D), delivered a sermon from Ephesians 4, focusing on the need for maturity and unity in Christ’s body, the Church.

“The unity of God’s people in the Scripture is essential for the anointing and the empowerment of the Holy Spirit,” Smith said after observing how some Christian leaders seem to trivialize unity to the point of even mocking those who pursue it.

“Jesus said the unbelieving world will know that we are Christ’s disciples by the love we have for one another,” Smith said. “Being disunified, being schismatic, like the Corinthians, undercuts our witness.”

Vance Pitman, pastor of Hope Church in Las Vegas, spoke next, and he pointed out the purpose of a local church: “When God births a church, He does so for his glory.”

The Southern Baptist Convention (SBC) has played a role in the expansion of God’s Kingdom as churches have come together to support missionaries and plant churches. The SBC has been about so much more than any earthly, political ideology, but Pitman shared a humbling reminder.

“God does not need the SBC,” Pitman said. “The SBC needs God, and if we don’t seek first the Kingdom for His glory and continue to be the best Kingdom investment for the dollar, He will use somebody else.”

Jeremiah, pastor of Shadow Mountain Community Church, concluded the pastor’s track of the Send Conference with a sermon that focused on the transforming power of the Gospel.

David Jeremiah, pastor of Shadow Mountain Community Church in El Cajon, Calif., addressed the Send Conference June 14. “The Gospel has the power to change the trajectory of your life forever,” he said (photo by Eric Brown)

“The Gospel gets into a person’s life, and it begins to change everything,” Jeremiah said. “And not only is the message of the Gospel transforming, but the work of the Gospel is also expanding.”

Jeremiah reminded pastors about the ministry of Billy Graham. Through wars, civil unrest and spanning the lives of 12 presidents, Jeremiah said, Graham preached the Gospel as if it was the only hope humanity had.

In concluding his message, Jeremiah encouraged Southern Baptists not to let side issues distract them from proclaiming the Gospel.

Former NFL tight end Benjamin Watson encouraged students and leaders with a message about the importance of teamwork in accomplishing the mission of God.

Repeating the Great Commission from Matthew 28:18-20, Watson emphasized: “Never lose sight of your mission. Good teams always remember and return to their mission.” Robby Gallaty, who pastors Long Hollow Baptist Church in Hendersonville, Tennessee, and opened the conference with a special time of prayer, told students about the greatest insight that changed his life: the Holy Spirit.

Gallaty urged students to recognize the significance of having the gift of the Holy Spirit. “Because of the power and presence of the Holy Spirit, it’s as if Jesus Christ were here with us in person today,” he said.

Sharing how Christians can come together despite cultural differences, Scott Long, discipleship pastor at Highview Baptist Church in Louisville, Kentucky, preached from John 17.

“Every one of us come from different backgrounds, different colors, different cultures, different languages,” Long said. “Apart from the grace of God we are a broken mess. Jesus, as a skillful designer, has a vision for the broken mess … He bleeds over us and out comes a beautiful, unified mosaic.”

SBC President J.D. Greear, pastor of The Summit Church in Durham, North Carolina, directed students to the life of Stephen in the book of Acts. He was an ordinary guy whose acts of service and testimony as the first Christian martyr had a major impact on the early church.

“At some point, if you are serious about following Jesus,” Greear said, “obedience to Jesus is going to take you 180 degrees opposite of where you think you want to go.”

Shane Pruitt, NAMB’s national next gen evangelism director, gave an invitation during one of the student sessions, and 20 students received Christ. The nearly 1,000 students who attended also participated in a service project.

The afternoon then closed with an IMB Sending Celebration as the missions entity appointed 64 new missionaries to the field (see related story).