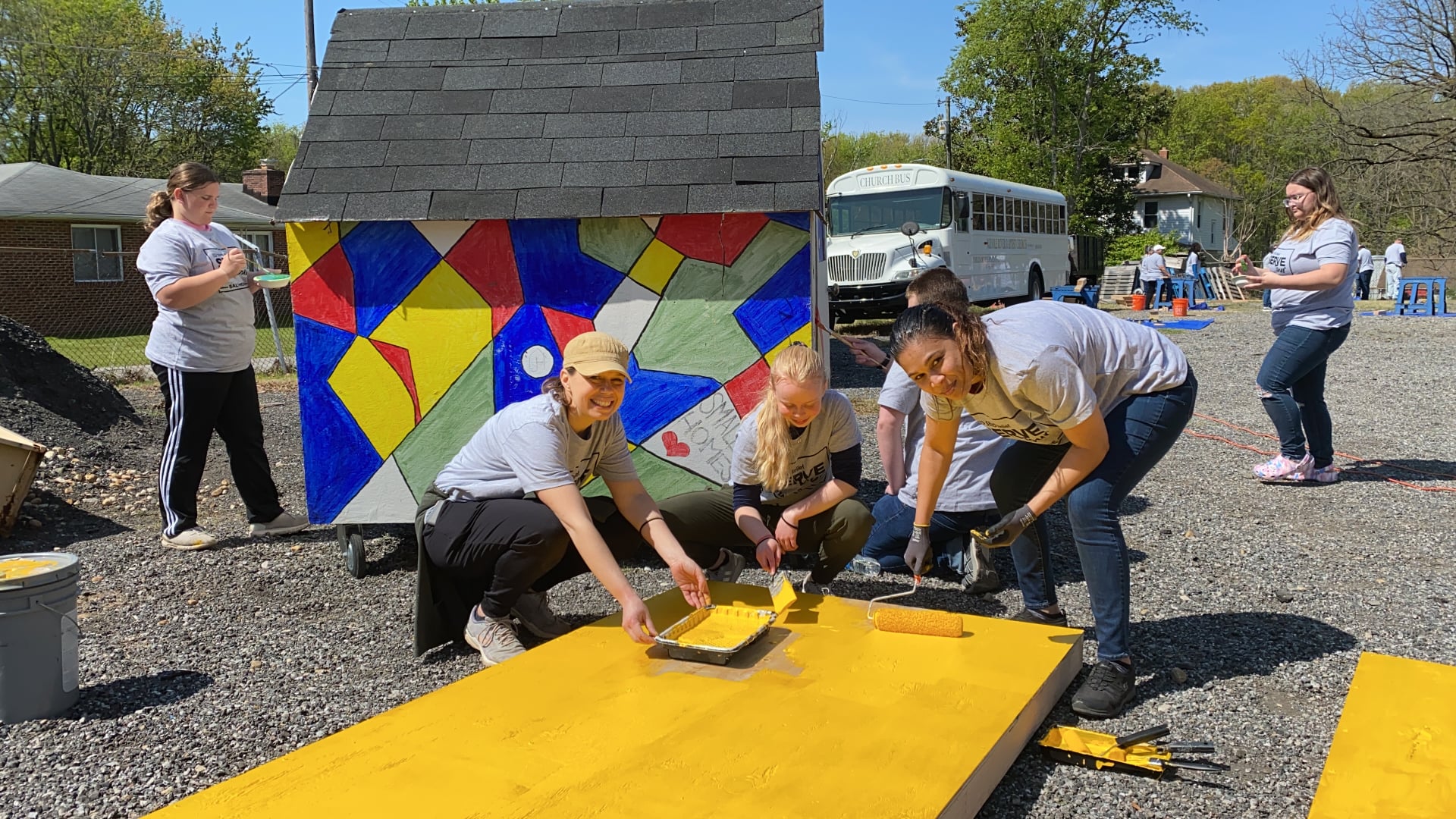 Hey, Baltimore got served! In a good way. Last weekend, April 29-30, the SEND Relief SERVE Tour came to Baltimore. At least four hundred volunteers from thirty-five churches in eight states arrived to lend a helping hand to Baltimore churches. Working alongside church members, they completed 21 projects. Some did light construction and beautification assignments. Others gave away food, oversaw block party stations, and even helped build mini houses for people without homes. There was a lot happening, and it was all bathed in prayer and done for the glory of the Lord. The tour was sponsored by SEND Relief, the Baptist Convention of

Volunteers work on framing for a downstairs bathroom at The Gates Church. (photo by Molly Ballard NAMB)

Volunteers worked on Friday and then gathered for a worship rally in the evening at Frederick Douglas High School, led by Lin and North American Mission Board (NAMB) National Project Director Sammy Simmons. Christian Liberty Church Pastor Wayne Lee shared the message, and the praise team was comprised of musicians from various Baltimore churches.

Lee shared from Matthew 14 about Jesus feeding the 5,000. When Jesus saw the people, He had compassion, Lee told the crowd. The disciples said this is the wilderness, and these people are hungry — send them away. Lee encouraged listeners to see with the eyes of Jesus, who told the disciples to feed

the crowd. Lee told listeners Jesus still wants to use us.

BCM/D Executive Director Michael Crawford encouraged volunteers. Nothing is an accident, he said. Crawford said there’s a reason each person, each church, was there for the Tour. Perhaps it’s to sign up for disaster relief or to go back home and mobilize mission teams.

Simmons challenged the audience by asking, what is it God is telling you to do? What is your next step?

SEND Relief Vice President Josh Benton told attendees about SEND Relief and shared how they can get involved.

Looking back at the Tour on Monday, Simmons was pleased. “There are some fantastic people in Baltimore, and it’s a joy to serve with them,” Simmons said. The people are dedicated and want to serve. Chuckling, he said at one point, a septuagenarian named Rita at Christian Liberty Church used her walker as a substitute wheelbarrow to move some limbs. When he asked Rita why she came out to do such physical labor, Rita replied, “Why would I miss out on an opportunity to serve my church?”

Simmons said he admires the church leaders in Baltimore and their dedication. “A lot of individuals who are serving in hard areas don’t seem discouraged. They’re not ready to quit. They have a great heart for the community.” He referred to churches in Brooklyn with “No Prostitution” signs along the streets. “While some run away from the hard areas, these pastors are running to them.” Lin was also excited about the weekend. “It went really well. A few mission teams were really inspired by what they saw.” Lin said several teams were interested in potential long-term partnerships.

Volunteers working with Redemption City Church paint an emblem at a school.

Middle River Baptist Church Pastor of Family and Connection Lonnie Ducket was pleased to work with a team from Gallery Church in Baltimore and with The District Church in D.C. While building panels for mini houses for people who are homeless, people talked, shared, and laughed together. Others from the community just stopped by and joined in, and Ducket said they had some gospel conversations.

On Friday, volunteers at Jesus Our Redeemer Church (JORC) served coffee to police officers, cleaned around the Baltimore Southern District police station, and painted the lobby. Additionally, JORC provided lunch and dinner for the police officers. The following day, volunteers worked to beautify Solo Gibbs Park in the Sharp-Leadenhall community. The ministry to the police officers strengthened the relationship between the church and police, and the park ministry was designed to build a bridge of trust and relationship with the neighboring community. Pastor Brad O’Brien said because of the SERVE tour, the relationship between the local police station and the church was strengthened.

At The Transformation Center, a ministry of Streetlite Christian Fellowship, volunteers painted classrooms and hallways, cleaned and painted the kitchen, and removed pews to transition an old chapel area to a multi-purpose room. On Saturday, the Center opened up for a community block party with games, inflatables, and food as an outreach to the neighborhood.

Love Light City Church also hosted a block party with games, slides, food, and other activities in an effort to show the community the church is there and seeks to minister and care for those around them.

Pleasant Rock Church, located in the Pigtown neighborhood of Baltimore, was built in 1888. One of their most fruitful ministries is their annual Vacation Bible School and ministry to those who are homeless. The church hosted a painting project of various areas in the church building.

New Southwest Baptist Church was founded in 1999, and the church inherited a vacant 1892 church building that was on its way to being demolished. They renovated for several years before moving in. The church has a long history of ministering to kids in the park and residents struggling with substance abuse. Volunteers worked with the church to paint the exterior of the building. Additionally, they helped clean up trash, connected with people at Traci Adkins Park, and had a cookout.

Volunteers at The Transformation Center work to clean and organize the kitchen. (Photo by Molly Ballard, NAMB)

Several teams helped at East Baltimore Graffiti Church with construction work on the church’s 100-year-old, 10,000-foot building they’ve been renovating. Pastor Charlie Brown envisions this building to be a new ministry and mission center, which will give the church a sanctuary to gather on Sundays and further opportunities for mission team housing, food/clothing distribution, tutoring, and recovery groups. The building will also include some apartment complexes, which they will rent out for income that will support our ministry.

During a Graffiti Church outreach at nearby Mund Park, volunteers served 750 hot dogs and hamburgers and hygiene kits and coordinated children’s activities. A local barbershop brought supplies and provided haircuts. Volunteers from Graffiti 2, from the Bronx in New York, were among those helping. Volunteers made 84 gospel presentations, and at least six people made confessions of faith. While at the park, two men’s groups marched down Greenmount Avenue to protest violence in the city. Some of those men stopped by the park, grabbed some food, and chatted with volunteers. Some were Christians; others were Muslims.

A volunteer works at Church of the Harbor in Edgemere.

Brown said there were a lot of good conversations.

Christian Liberty Church has had tremendous success with multiple outreaches, such as their “O Give Thanks” project in the fall,  in their community since the church started. Through the weekend, volunteers painted, cleaned, and did beautification projects at the church’s West Baltimore campus.

Epiphany Church in North East Baltimore has a relationship with a local school, providing backpacks and school supplies, decorating hallways, and dropping off goodies for staff. They recently painted the school auditorium. During the SERVE tour, volunteers helped paint the school’s special education rooms and hallways.

The Church of the Harbor Edgemere Campus was active with outreach, family meals, and more. The church building needed some renovations. It had been 30 years since any work was done on the exterior of the building. During the tour, volunteers painted, installed an aluminum awning over the entryway, and installed some doors.

In Armistead Gardens, The Gates Church utilized volunteers to help with building a small bathroom on their main floor. Currently, members have to go downstairs to the restrooms, making it difficult for some. Volunteers helped with framing walls and doing some sheetrock work.

The church also secured a dumpster for the community and utilized volunteers to help unload items from vehicles and engage with neighbors.

A volunteer at Christian Liberty Church uses her walker as a wheelbarrow to move branches. (Photo by Molly Ballard, NAMB)

Redemption City Church, planted in the Canton, has been partnering with schools and other organizations to share the gospel. During the SERVE tour, volunteers working at an elementary school painted several large common areas, a school logo mural, and a geometric design in the main hallway. They also power-washed the exterior of the building and installed new locks in the student bathrooms.

Freedom Church volunteers helped with a church block party. The church invests a significant amount of time with parties they use for outreach and, prior to Covid, would draw about 700 attendees. In addition to moon bounces, laser tag, lawn games, and food distribution, a trained evangelism team was engaging visitors. Volunteers also helped with cleaning and landscaping activities at a local school.

Parkville Baptist Church and Nepali Speaking Church of Baltimore, which shares the Parkville building, utilized volunteers to help host a yard sale and offer food and games o their community in an effort to reach out to their neighbors.

Additionally, a large team of Disaster Relief volunteers and others worked on Friday evening and Saturday morning at Middle River Baptist church preparing meals. They served volunteers at the Friday evening rally and delivered food to the work sites.

Feature photo: Volunteers work together to help build tiny houses for people who are experiencing homelessness.