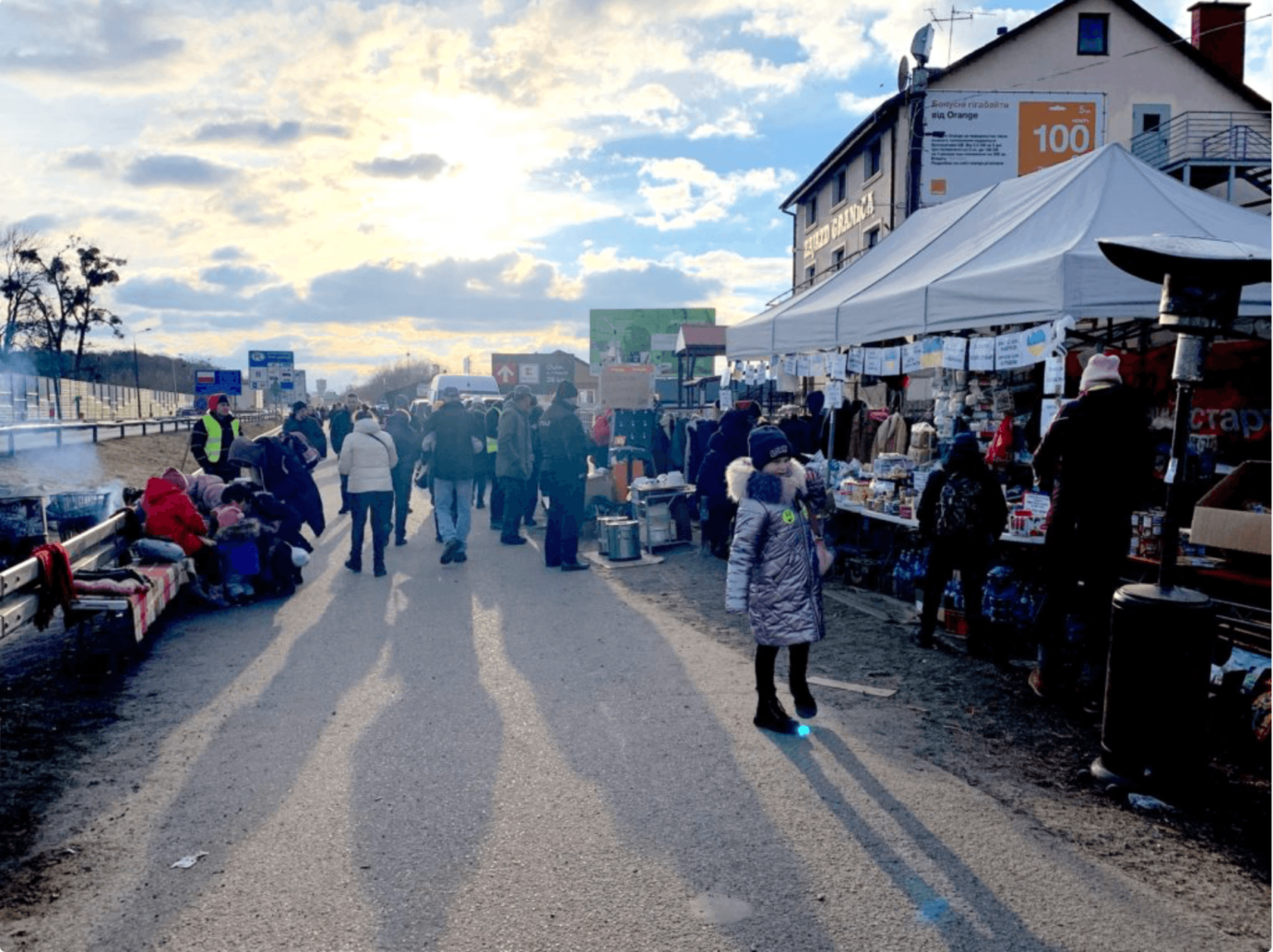 POLAND (BP) – A Disaster Assistance & Response Team (DART) of Southern Baptist Disaster Relief (SBDR) and volunteers returned from Poland last week to survey ways that volunteers from the U.S. might engage and serve Ukrainian refugees fleeing the invasion of their homeland.

“We were the initial team to go in and assess how volunteers from the U.S., specifically DR volunteers, can be involved in helping with the refugee crisis in Poland,” said Tom Beam, state director for SBDR with North Carolina Baptists. “There are many Polish churches and International Mission Board (IMB) missionaries who are working with refugees, and our task was to assess how we could best assist them going forward.”

A DART of SBDR staff and volunteers returned from Poland last week after being sent by S.R to survey how trained volunteers from the U.S. can serve. (l-r) Wanda Temple, Bobby Temple, Tom Beam, and Dan Phillips from North Carolina; John Heading, SBDR director for Ohio Baptists; and Linda Mitter with the SBTC (photo submitted by Tom Beam).

So far, SEND Relief (SR) and SBDR have identified four different sites – in the Polish cities of Warsaw, Chelm, and Gdansk, and in Suseava, Romania – where small teams of no more than 10 volunteers will be able to serve local churches who are ministering to refugees by cooking meals, hosting activities for children, doing laundry, and cleaning showers, among other projects as necessary.

“It’s a great picture of partnership,” said Jason Cox, SR vice president of international ministry. “Southern Baptists didn’t just show up at the moment of crisis – they have been working for decades since the fall of the USSR to plant churches and disciple Christians all over the nation. Now the local church is stepping up and stepping in. So we’re really coming alongside them in a support role.”

Many of the people who were among the first wave of refugees fleeing the invasion by Russian forces likely came from those with greater means and resources to leave Ukraine, Beam said.

“From here on out, it is our understanding that the majority of refugees who come across the border are those who do not have the means, who do not have family in other places,” Beam said. “That changes the dynamic of the type of refugee and what the types of needs are.”

Beam led the DART team made up of SBDR volunteers from his home state of North Carolina as well as Texas and Ohio. In their travels to visit the different sites where future volunteers will serve, the DART team also spent time at the border where they saw cars and trains full of people moving across the border.

“What we noticed the most was that, every minute, about six to eight people would walk across the border,” Beam said. “That’s when you saw some of them trying to find someone who could assist them with whatever they needed, whether that was finding a hot meal or asking where they could go to find shelter.”

Bobby and Wanda Temple, a pair of North Carolina Baptists who were on the initial DART team, have been participating in overseas volunteer work for 35 years and will be the site leaders in Warsaw. They will serve for a month as other volunteer teams rotate in, serving one week at a time.

Wanda described the wave of refugees as an “ocean of people.” Many were women and children leaving behind fathers, husbands, and brothers who are fighting to protect their nation.

She and her husband are members of Fellowship Baptist Church in Creedmoor, North Carolina, which they described as a small, country church.

“It was humbling to see these churches in Poland that are even smaller than ours opening up their buildings and doing the best they can to provide warmth and food and encouragement even though they have so little budget to go on,” Wanda said. “They’re willing to give it all. It’s so humbling.”

The immense need left them feeling helpless, Bobby said, but the eagerness of Polish Baptists and the Polish people to serve those in need also inspired them to return and make a difference by ministering both to refugees and the Polish volunteers who are serving.

“The pastors and volunteers are overwhelmed with all that they have in front of them, but they will continue to be there for the refugees,” Bobby said. “Many (SBDR volunteers) are going to support those who are serving the refugees, to let them know that we care and that God cares for them.”

A team of volunteers with Texas Baptist Men will be leaving this week to serve in Chelm, working with the Chelm Baptist Church. Other SBDR teams will be departing for eastern Europe before the end of March.

The North Carolina team will serve in Warsaw with Polish Baptist Union churches and IMB missionaries. A combination of Ohio and Louisiana SBDR volunteers will serve in Gdansk to serve the First Baptist Church there that has been serving refugees.

A group of Ukrainian refugees eats a hot meal in Romania provided through SR’s efforts to meet needs in the aftermath Russia’s ongoing invasion of Ukraine (photo submitted by an IMB missionary).

“The pastors there told us to continue to ask your people to pray because that’s what motivates us and keeps us,” said Wanda.

Walter “Wally” Leyerle, a disaster relief associate with the Southern Baptists of Texas Convention (SBTC), will be leading a team of SBDR volunteers from the SBTC, Missouri, and California to Romania where they will be working with IMB missionary Mick Stockwell and local Romanian Baptists to serve Ukrainian refugees who have fled to Romania.

“Our expectations literally are to be God’s hands and feet to everybody we encounter,” said Leyerle. “We are going to share the gospel whenever we have the opportunity, but we will also be sensitive to the needs and openness of the people we meet.”

SR has, field personnel and Polish Baptists, been serving refugees since the start of the conflict as local churches and missionaries in Poland have been ministering to and providing necessities and sanctuary to those fleeing the war in Ukraine.

The groups SBDR will be sending are trained volunteers who have been specifically requested by SR, IMB, and local ministry partners. To learn more about how to become a trained SBDR volunteer and be able to respond in times of crisis, local Southern Baptist state conventions provide various training opportunities throughout the year.

Brandon Elrod writes for The North American Mission Board.

Visit the Baptist Convention of Maryland/Delaware’s Ukraine Relief webpage to learn about how you can care for refugees through prayer and giving.

Cover photo: Ukrainian refugees continue fleeing their homeland in the aftermath of the ongoing war with Russia. In this photo, refugees stop along the road to Chelm, Poland, which is just a few miles from the Ukraine border (photo submitted by Tom Beam).