‘Turning Point’ Church lives up to its name 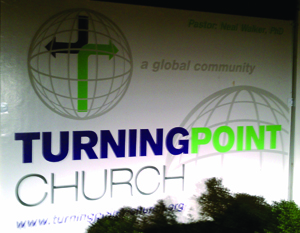 Renamed in Fall 2011, the church’s new name reflects the church’s rebirth from only three official members to now more than 100 members and well-wishers who attend from time to time. The name also speaks directly to the hub of the Washington, D.C., suburban community, which is facing constant change and turning, as well as the church’s intentional effort to turn people to Jesus, he said.

Walker, who just retired from almost 24 years of active military service at the Department of Health and Human Services, is a clinical psychologist with MedPsych Health Services in Rockville, Md.

He became pastor of Wheaton Woods Baptist Church in 2001 after his wife Marge was approached with the idea by a chaplain at Shady Grove Hospital, where Marge’s mother was receiving treatment. The chaplain had no idea Walker, originally from Guyana, South America, had been a pastor in Jamaica right after seminary.

The church was dying, and the chaplain was looking for someone to revitalize it, Walker explained. At the time, the church had dwindled down to three faithful women, who faced the formidable decision to either disband the church or find someone to rebuild it.

Unbeknownst to the Walkers, the three ladies began praying specifically for a pastor who was “trained in the ministry with a musical family.”

He was a guitarist. His wife, also a Spanish teacher in the Montgomery County public school system, was a soloist. His son was a trained virtuoso piano player, and his two daughters became active members of the creative dance group, Alpha Omega.

And together with his aunt, his family could add six more people to the church, already increasing its membership by nearly 200 percent.

Intrigued by the challenge, Walker and his wife visited the church to learn more. “It was a good thing it was at night, or I would have been more inclined to say no,” he remembered, noting he couldn’t see the physical structure, which he later learned was “under siege, unkempt and falling apart.”

In the daylight, after already feeling God’s call to accept the pastorate, he saw there was much work to do. The church had about four acres of land, and its building was in great need of repair. It was a true challenge to retrofit the building. As a bivocational pastor, he, his family, and a small group of new members painstakingly worked little by little to update the church, which eventually led to its renaming.

Walker held a competition with church members and well-wishers, soliciting new names to go along with the fresh look of the church. Overwhelmingly, “Turning Point,” representing every sense of change and transformation, was chosen. It has become the church’s “code to move forward” and mobilize into the surrounding communities, he said.

Though great progress has been made, Turning Point Church welcomes volunteers who can assist with ongoing projects. Presently, the church is seeking to reconstruct an old shed on the back of its property.

In addition to adding Turning Point to your prayer list, they would appreciate assistance with painting and touching up, and during the summer months, help with their Vacation Bible School. If your church is interested in partnering with Turning Point, contact Pastor Walker at (240) 426-1600 or his wife Marge at (240) 426-5859.