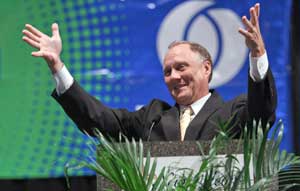 David Crosby, pastor of First Baptist Church in New Orleans, was the featured speaker during the evening session June 17 of the 2012 WMU Missions Celebration and Annual Meeting. Photo by Matt Miller.

NEW ORLEANS (BP) — “The Story Lives On” — Woman’s Missionary Union’s 2012-13 theme — took life through the words of a New Orleans pastor, an International Mission Board missionary and others during the opening session of WMU’s June 17-18 meeting in New Orleans.

As noted by Debby Akerman, WMU president, “The Story Lives On” focuses on the Gospel’s ability to transcend generations, transforming individuals, churches, communities and nations.

“It turned our city into a lake,” Crosby said. “Eighty percent of the footprint of the city of New Orleans was covered with water. Our church was an island in a flood for three weeks. And when I came in by helicopter 11 days after the storm, I wondered, ‘God, will it ever come back together again?’

“And then, there was a rush of wonderful love. A flood of people, thousands and hundreds of thousands, who came to help in this city that care forgot.”

But such love isn’t easy to come by. Referencing the story of the Pharisee who tested Jesus in Matthew 22 (asking Christ which commandment was greatest), Crosby said it wasn’t the first commandment the religious leader struggled with but the second.

“Love the Lord your God with all you heart, soul, strength and mind. He felt he had that down, he was a devoted Jew,” Crosby said. “He went to synagogue, he said his prayers and gave his tithe. … What troubled his conscience, why he wanted to justify himself, was the second: Love your neighbor as yourself. You might be a little like him. I think I am.”

That’s why Jesus gave believers the story of the Good Samaritan in Luke 10, Crosby explained, “to help you and me understand what it means to love your neighbor.” And love, he said, walks into a trial.

“Love is so complicated and so difficult, it’s such a mess. It’s just easier to walk by the other side of the road. I mean, you got church work to do, meetings to attend — we’re busy people.

“Talk about washing feet? A beautiful rendition of that story — it’s going into a stranger’s house and cleaning up after the flood, and helping that poor soul deal with the fact that he brought a truck to take what he wanted to save, and  he can fit it all in a 13-gallon trashcan.”

WMU attendees also heard about the power of Jesus’ story from Annette Hall, an International Mission Board worker who spoke about the impact of chronological Bible storying. Hall has worked for nearly 40 years with North African and Middle Eastern peoples, and ranks among IMB’s top oral evangelism experts.

“Two-thirds of the world’s people are oral communicators,” Hall said. “That means that they learn through stories or music, drama or poetry. … If you hand them a book to read, they either can’t read it or they won’t read it.”

Hall said the process behind chronological Bible storying is simple, often using a set of 20 individual stories that move listeners through the Bible from Genesis to the second coming of Christ.

“We don’t teach. We want people to get the point of the story from the story — they need to discover it for themselves. If I tell them the answer, it goes into their heads but it doesn’t go into their hearts.”

Hall shared a recent success story from a Bible storying training event she led in southern Asia last year. One of Hall’s colleagues, who helped with the training, met a young woman whose family had been radically changed.

“The woman said, ‘There were some people from my village who went to a training and they learned how to tell Bible stories. And they came and they told the story for me and my family. Now I am a believer and so is my family. All of us believe in Jesus,'” Hall recounted. She added that more than 20 people in that village have been baptized as a result of chronological Bible storying.

“Chronological Bible storying is a powerful tool,” she said. “God gave it to us. He gave us a book full of stories. And all we have to do is learn to use them.”

Sunday afternoon, WMU attendees were introduced to this year’s National Acteen Panelists, young women chosen from across the United States “based on their commitment to missions and participation and leadership in their Acteens group, church, school and community,” according to WMU’s website. Acteens is WMU’s missions organization for girls in grades 7 through 12.

Mary Harper, from First Baptist Church Prattville, Ala., told WMU that she learned boldness in sharing her faith through interactions with a Korean student she met in a high school chemistry class. Harper described him as a devout atheist who would often work “page after page of physics problems that he claimed proved God did not exist.”

“He was so much smarter than me, but I knew that my God, the God who gave Daniel the courage to face the lion’s den, and the God who gave David the strength to overcome Goliath, would give me the words to say to persevere,” Harper said. She continued to share with her friend over the past two years, and though he has not yet made a commitment to Christ, Harper said he’s begun reading his Bible daily and attending church.

“I know that God will continue to work in his life, Harper said. “Through this experience I have learned that God calls all Christians to be missionaries, even if this simply means being willing to share His love with the people we meet in our everyday lives.”

Each of the six Acteen panelists will receive $1,000 from the Jessica Powell Loftis Scholarship for Acteens from the WMU Foundation.